A skinny, muddy, tired-looking young man in a WWI uniform was standing on the market square. The rain hammered down onto his slumped shoulders, but he hardly seemed to notice. In summer 1914 he still had been an enthusiastic youth, dreaming of gloriously serving his country, and being back home before Christmas, welcomed back as a hero. But here he was, speaking of mud in the trenches. Mud in October. Mud in December. Mud in March. 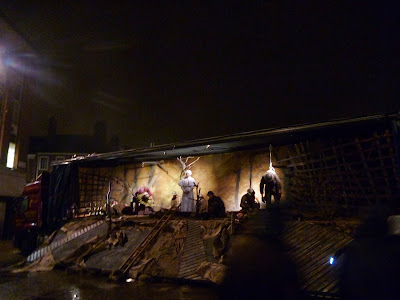 The man, clearly, was an (amateur) actor, but the market square and the rain were real. This was all part of the production “Blood and chocolate”, which told the story of York, its iconic chocolate factory, and WWI. Its stage was York itself. I had been alerted to it by Annemarieke who played a nurse in it, and I convinced Tom to come with me. He wouldn't regret that!
The audience followed the play around through the medieval streets, over the squares, past the Minster and ending at the old castle-and-bailey. All members of the audience wore headphones, to make sure the sounds of the city wouldn’t drown out the voices of the actors. Many scenes were played out on ladders, on carts, even on a cherry picker, to make sure that all 300 people could see what was going on. 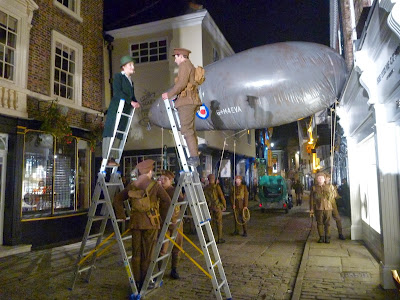 The main characters in the historic city centre

The performance started on a square opposite a monumental white building. And the action started with projections onto that building. There was a ball going on inside; it was as if you could see though the walls. That was really well done! In between the projection, a man appeared on the balcony, and brought the news that war had been declared. Soon young men in army uniforms were dashing through the audience, to get into formation. They were off to defend their country! Back to the ball. A young man tried to convince a lady to hold his hand. He would soon be off to war, and maybe he would never come back! He didn’t want to die without having felt her hand. Their close-ups filled the façade of the building. Later he told his mother he had enrolled. So had his brother! We would follow these young men and the women they left behind through the war. 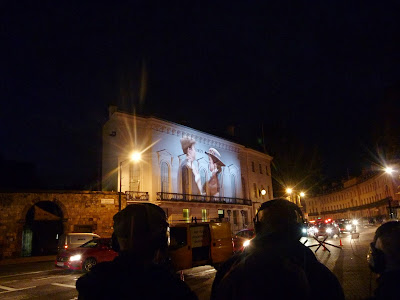 The play starting as a projection, while city traffic just flows on underneath

And then there was chocolate. York was famous for Rowntree’s, the chocolate factory, founded by Quakers. The factory decided to send every York man in the army a ration of chocolate; this seems to have actually happened. (Everybody in the audience received a commemorative tin with two chocolates in it, too!) But not all thought that was enough; should not every man go into war, serve the empire? But not Quakers. These are pacifists. This was the other, less obvious story line; of the Rowntree bigshot who refused to be conscripted, who saw killing as murder, and who was court-martialled for cowardice.
And the war progresses. The trenches turn to mud. The letters announcing the deaths of loved ones start coming in. The girls take over the men’s jobs. 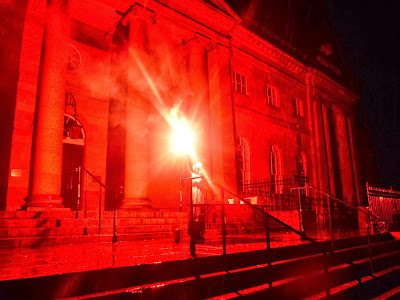 Armistice is lit up by the main character with a red flare
And then; Armistice. Good news? More the absence of more bad news. Armistice in this play fell down upon the people as extra poignancy for the last deaths. As poor consolation for the man who came back blind, for the Quaker who came back from prison only to be beaten up, for the man who came back shell-shocked, for his mother and girlfriend who know that what they got back was not the best of him. We were left with these images as the cast withdrew. There we were standing, in a rain-battered square underneath Clifford’s Tower, contemplating that this clearly wasn’t the war to end all wars. A feel-good production? Most certainly not. Beautiful and well-performed? Very much so!
Posted by Margot at 13:29