"If I wanted rejection, I'd audition." It's a brilliant line (at least that's what I think) from a song by Maria Mena. Nobody likes rejection! I had not experienced in in my scientific writings. I often have to do a "major revision", but it had never happened to me that an editor received one of my manuscripts, and decided to not even send it out. But now it has! We had sent our manuscript, which presents a 600 year sea level reconstruction for Iceland, and relates the changes seen in it to the North Atlantic Oscillation (NAO), to Earth and Planetary Science Letters; that was a bit ambitious, I have to admit. Their scope is, and I quote: "Earth and Planetary Science Letters (EPSL) is the journal for researchers, policymakers and practitioners from the broad Earth and planetary sciences community. It publishes concise, highly cited articles ("Letters") focusing on physical, chemical and mechanical processes as well as general properties of the Earth and planets - from their deep interiors to their atmospheres." The editor in question said our manuscript was too specialized. Well yes maybe it is. So now we'll send it elsewhere! 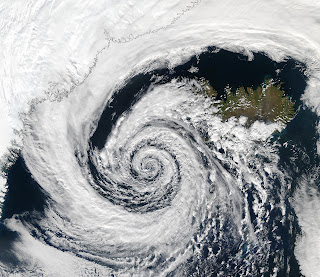 The Icelandic Gyre, which plays a role in the NAO

I was myself thinking of Palaeogeography, Palaeoclimatology, Palaeoecology ("...an international medium for the publication of high quality and multidisciplinary, original studies and comprehensive reviews in the field of palaeo-environmental geology. The journal aims at bringing together data with global implications from research in the many different disciplines involved in palaeo-environmental investigations.") One of my co-authors suggested Global and Planetary Change, that also published my latest article on the Barents Sea. We were also considering Climate of the Past, but that is an open access journal, and it's expensive to publish in these. The idea behind this is: someone wants to get rich over the backs of scientists. So we do the work, and then generally deliver out work for free (or even pay a fee for colour figures) to a journal, which takes over copyright, and which will place your work behind a big paywall. And then they can cash in. If it's open access they make the authors, rather than the readers, do the paying. And we ran out of money! It's a daft system, but once the ball is rolling it's hard to stop.

And then Roland came up with Climate Dynamics. In the first instance that sounds like a journal for research on the processes going on in climate, not on reconstructions of what has happened in the past, as necessary as it is to have the latter to understand the former. But I read the aim: "Climate Dynamics provides for the publication of high-quality research on all aspects of the dynamics of the global climate system. Coverage includes original paleoclimatic (!), diagnostic, analytical and numerical modeling research on the structure and behavior of the atmosphere, oceans, cryosphere, biomass and land surface as interacting components of the dynamics of global climate". So it's a good candidate after all! And it's still a journal with a high impact factor. It of course means re-formatting the references, re-naming all the files, putting the figures in a different format... lots of faff. But hopefully worth it! We'll see how we fare! It's submitted now. I keep my fingers crossed...
Posted by Margot at 09:55