"We have something to show you!" I was at the garage, to pick up my car. They carried a handful of loose bits of metal to me. Then they raised it to my nose: "this must have been what you were smelling!" and indeed it was. The foul odour cars can sometimes rather inexplicably emit was unmistakable. And I recently had gotten quite a large cloud of it.

What they carried to me was what had remained of my clutch. It had given me trouble: a few days before I had just wanted to drive off, but instead of acceleration I had gotten smell and powerlessness. That worried me! I phoned the garage, and from my description they couldn't tell what was wrong with it. They recommended that I would come in with my old car.

When I started the engine again after having hung up, the car responded normally, so I drove to the garage without issues. The garage holder got in, and without even taking it off the handbrake, he tried out both forward and reverse. That was enough for him; he re-emerged from the vehicle, and said "your clutch is gone". I was glad I had chosen to have it checked!

A new clutch isn't cheap, and the car is old. The question was if it was worth having it replaced. The garage holder had an idea: he could perform an MOT (which was due anyway), and if it would fail in many ways I had better scrap it. Did it pass, then I might as well have the clutch repaired, as buying another car is a lot of hassle. And the next Monday I received a phone call: it had passed! So I asked them to proceed with the clutch replacement.

On Tuesday I came to collect it. That was when they brought me the crumbling remains of my clutch; they hadn't known what was happening to them when they opened the car up and found that. "Did you really drive to us with that??" I must have been lucky. 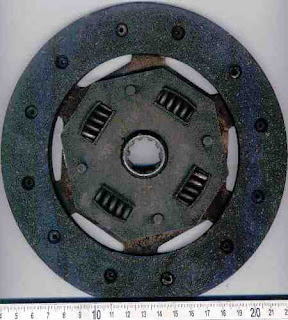 A clutch disc as it is supposed to look; mine had fallen apart into components...

I had to cough up 80% of what I had initially paid for the whole car, but when I drove away I noticed I had gotten worth for my money; it drove like a new car! Such smooth gears! It was a right pleasure steering that reborn machine through the streets. And I have managed to show a seasoned car mechanic something he never deemed possible...
Posted by Margot at 09:35