I have a scar on the sole of one of my feet. It's been there for some 20 years. And although I can feel it, it doesn't normally bother me. But recently it has started to become uncomfortable. I think that is because these last nine months I have been running more than ever before in my life. I run practically every day! In the olden days I only went in the weekend, while during the week my exercise came out of my bike. Then in the even more olden days, I ran 2 to 3 times a week. So my feet just have more to do now, and one of them was starting to protest. And I wondered if I could do something about it.

I had a look on the NHS website. There is a lot of information there, and I trust it. And it suggested that you can put a silicon sheet on a scar, and that that makes it soften and fade. That sounded exactly like what I needed! So I ordered one. And I tried it out.

So what I think? Well, whether it makes my scar soften and fade remains to be seen; that takes a lot of time. I suppose that with a scar this old, it takes even more time than average. The packaging says it sorts out scars of up to 20 years old, so I might be at the edge of what it can work with, but time will tell.

But what is it like to wear it? Well, it's great! It's like you walk on a little jellyfish, which absorbs all the shocks. So even if it won't soften the scar, then at least it takes away the symptoms. If your body has lost its bouncy tissues, then just glue some onto the outside! And I am certain this patch is not going to last very long given the battering it gets, but I can just buy more. Worth every penny spent! 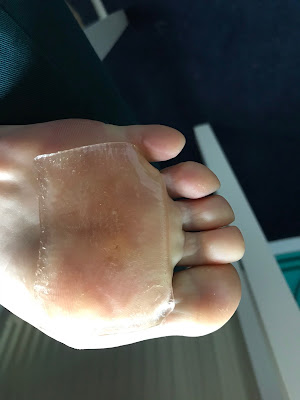