I'd never picketed before! But my plan was to go to the main building, the strike hub, on Thursday and see what would happen. But then an email came through saying there would be an SOS picket line and I reconsidered. SOS is a lot closer! And I assumed the people at the main building would send me there anyway. Going directly would cut out the middleman.

When I got to SOS I saw four people linger at the edge of the car park in front of 'my' building. That must be them! And they were. They were all from different schools. They were nice! But it was a bit of an overly quiet picket. Hardly anyone passed!

Some cars drove past without turning into the car park. Some people did, but mostly PhD students and support staff. Only four members of academic staff passed! They probably weren't union members. And two PhD students came out to talk to us. They supported us! It felt a bit strange to stand there in the sunshine, waving placards at pretty much nobody. 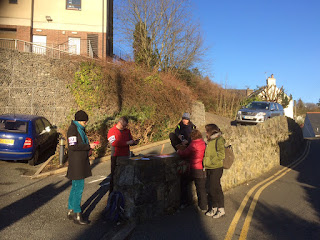 The picketers are checking strike updates on their phones

After a while we decided to walk around our little campus to see if there was a better place to stand. Between the buildings was probably better; people parking on the other side and going into one of the other buildings would barely see us! But by then we had been there for a while. I had stuff to do in Bangor too, so I left. I don't think the others stayed much longer!

The next day I came to SOS again. It was a cold morning so I had a down jacket and long johns on. There was nobody there! And as I hadn't come via the main building I didn't have any placards or flyers. Oh well. I did see someone waving at me; it turned out to be Sarah, who was just about to leave for the main building. I considered joining, but decided to stay. They may send me back anyway! And maybe someone would show up in the meantime.

I looked for a good place in the sun. I saw a slate wall and thought I may sit on it. Hopping on, though, I heard an unnerving tearing sound. I had torn my down jacket in two places on the sharp rock! Oh dear.

I positioned myself elsewhere and took the newspaper out. I had brought something to read for just such an occasion! I was a bit of a sorry picket line. Some people had a chat on the way in. That way I found out how the Thursdaynighters had spent their night after we'd left them the night before (blog post to come). And I found out one of the cake competition contestants!

Later the Head of School popped by. He was supportive of the strike but thought I was a bit of an underwhelming picket line. He was right, of course! He told tales of his earlier exploits in similar situations, with being manhandled away from the main building and all. A bit more convincing! But well, I'm new to this. He also said he didn't think the full 14 days would be needed; I really hope he's right!

After some two hours I had had enough. I went home! And struggled a bit to do stuff that needed dong the rest of the day. I has worn myself out a bit earlier in the week!
Posted by Margot at 07:17