New building: in use!

When I applied for my current job, James pointed the foundations of the new buiding out to me, and explained that the building of those would be the most time-consuming part of the process. The rest would just shoot up! I actually believed him. He probably believed it himself.

When I came back to start the job in April it was clear that indeed a lot of progress had been made. There was verticality! In May I blogged about it. But then the promised speed didn't materialise. There was a lot of pootling and re-doing things and nothing happening. A year later, the building acquired its main door. A nice addition. But did that mean it was almost finished? No. It was turning into a bit of a shame, just like the embarrassing delays in the building of Pontio.

By November it was building-shaped and had lost most of its fences. It wasn't finished yet, but some of its occupants were moving in anyway, as there would be a big financial penalty for the building not being put to use by then. It was a bit weird. Some offices were in use, but we the other SOS-ers were not allowed to go in yet, and workmen in hardhats were still scurrying around all over the place. There was still scaffolding and paint and whatnot everywhere too.

Then the first public event took place in this building: the annual Christmas drinks. I just came out of a trying meeting so I didn't think of taking pictures, but I had taken a few on an earlier occasion, when I had to see one of the building's occupants. It isn't finished yet, but it's in use, it doesn't make much noise anymore, and it doesn't have many impeding fences! The waiting is almost over and the building has turned from nuisance into asset! 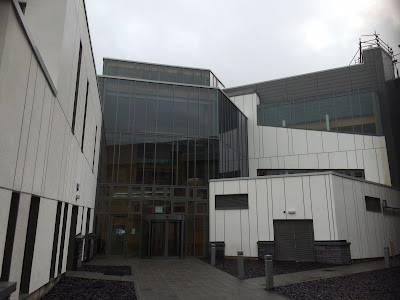 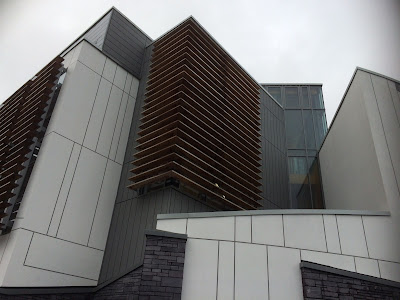 A view from the back 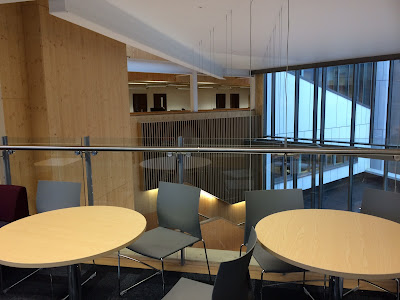 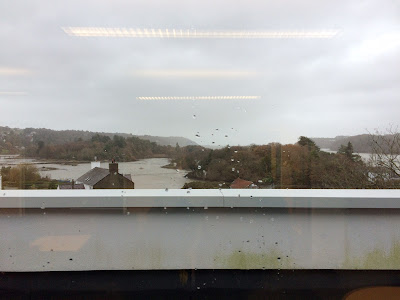 The view from the coffee chamber 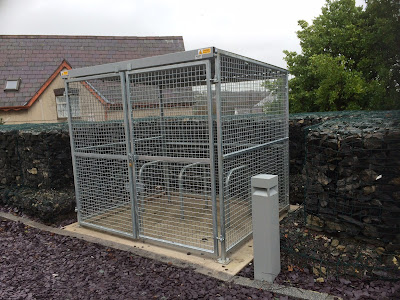 The only provided bicycle parking