I thought I was going to have a quiet evening after the helicopter adventure. But the evening before all suddenly changed; a 40th birthday party of a colleague (another one!) fell out of the sky onto my plate. This time it was Will, with whom I mainly have interacted by running, but who also is the geographical man in the CORiF lab, so he's also the one that pointed me in the right direction regarding radionuclide dating. And he works closely with Hugh. An honour to be invited, though it came somewhat abruptly!

It was a masked event, so on the way home from the royal marines base I met up with Hugh at a fancy dress shop to equip us. Then I unpacked, had a shower, changed, and left home again. 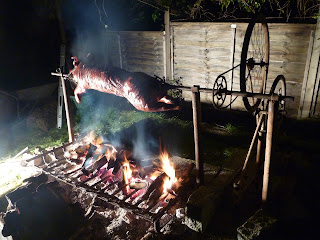 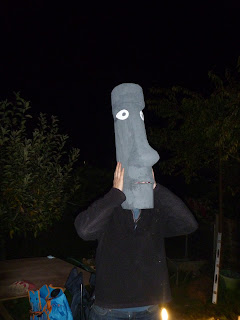 Once in Totnes we were greeted by the hosts, and by their very special guest: a pig on a spit. It had been there since 1PM! And it was turned by a spiffing construction made of en electric engine and a bicycle. Brilliant! The host, who had the best, though not the most practical, mask of all, explained the party was just some side effect of the roast; if you have an entire pig for dinner you better have some people to help you eat it.

It was a good party! Good to see our colleagues have nice friends. And a party with a full size keg of ale, a pig, an additional fire, lots of pork-accompanying food, silly masks and whatnot is always nice. I just wish I had known in advance it would all be outside... in mid-October such is relevant information!

As we were both knackered from the week that had passed we left as soon as the dessert was devoured. That way we managed to be home at midnight... I hope the party continued well into the night! Congratulations Will! To another forty!
Posted by Margot at 13:38