Camera crew down the cliff

I can tell you it’s worth getting up at 5AM in order to throw a TV presenter off a cliff. At least sometimes. I tried! I recently got a message from the Cornish caving club that they’d been asked to help a camera crew record a part of a TV programme dangling off the cliffs near St Agnes. And that sounded fun to me. A drawback was that they wanted to start filming early as they had another location to do later that day, and for us Devonians it’s quite a drive. But if that’s what it takes…

I got up at 5, got ready, drove off in the wrong direction, turned around, drove almost in the right direction, managed to find Lionel, and had him drive the rest of the way. We arrived at an old WWII airfield, now in use by a local skydiving club. No-one else to be seen. Soon some chap I hadn’t met before arrived; he seemed to have coordinated much of this. Only a while later the first Cornish Caver appeared; it turned out that Mark claimed he had said 7.30 to Lionel, who claimed it had been 7.00, and who hadn’t even bothered to figure out how long it would take to drive there. Sigh. 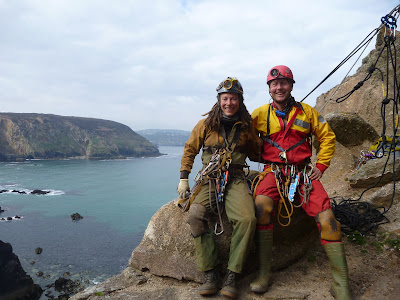 Lionel and me happy and all kitted up; pic by Daz

Not much later, though, everybody was there, and after quite some faffing we could get kitted up and start hauling all the ropes and rigging and cameras and tripods and whatnot down. The idea was that the presenter of the programme would abseil down the cliff to a mine entrance while talking into the camera. Abseiling wasn’t at all necessary, as there is a path, but abseiling looks cooler. The mine wasn’t related to the programme either, but who would know? And we were there to make sure that presenter and camera man would come down safely. And when we were there anyway we would afterwards have a nice scurry around in the mine. Having come all this way we didn’t want to miss that! 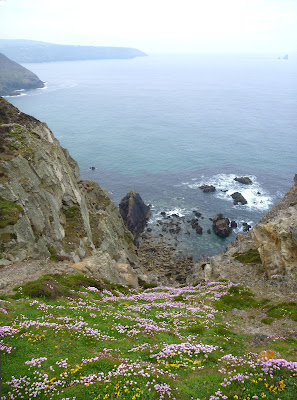 The top of the cliff; from here the camera man would abseil to do long distance shots of the presenter 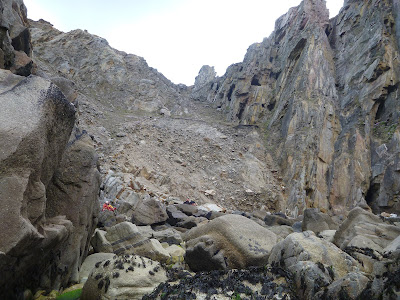 That same location seen from below

Rigging always takes a while, but nobody was bored, as one of the Cornish had brought his very charming dog along, that wanted to fetch things; preferably rocks. Cliff faces no objection. If you didn’t notice, or ignored, him he would often drop a rock heavily onto your shoe by means of subtle hint. Soon everybody was in love with the little bugger. 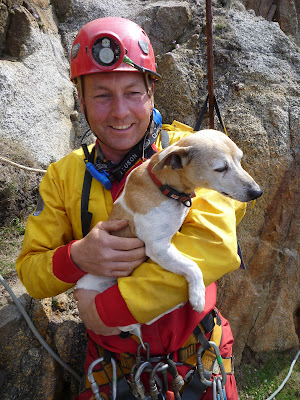 Lionel and his new friend 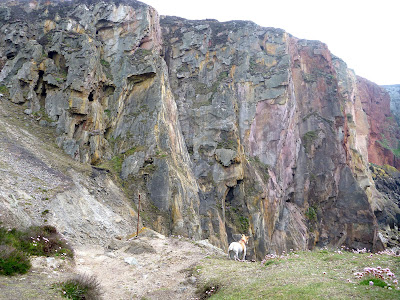 The little doggy intently following whatever happens below

When the rigging was done it was my task to test it. An honour, of course. It was fine! So then Lionel and I would wait below for Dan, the presenter, and Matt, the camera man, to come down. That took forever, of course! Dangling uncomfortably from a cliff poor Dan had to do a short spiel about Britain, the Bronze Age, and Cornish mining. And not a word, look or gesture can go wrong, of course. But it does. So he had to do his “the Bronze Age helped make Britain great” speech, that mentioned the very relevant Cornish mineral riches, time after time after time again. So many times he faltered or got a phrase wrong, added an expletive, and started again. I started to get huge respect for presenters. The 15th time it still has to sound spontaneous! 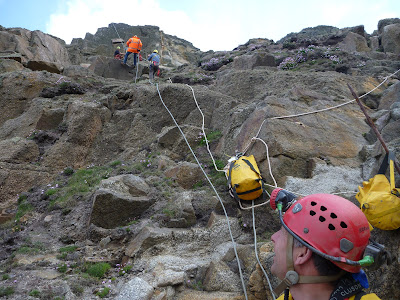 The presenter and the camera man starting to come down, under the watchful eye of Lionel 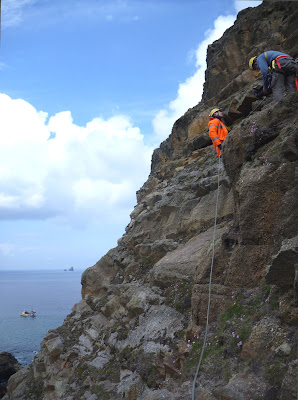 The uncomfortable way of dangling from a rope: with a camera in your face 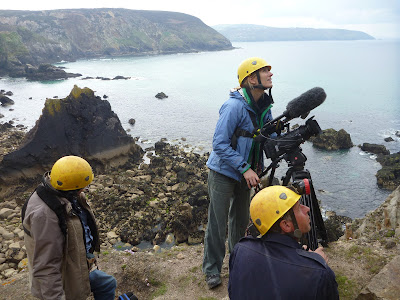 Fortunately, both guys were doing quite well on the abseiling front, so we didn’t have a hard time getting them down. Only later I would realise they would have to go down several times more… It has to be filmed from above. And from below. And from the side… poor guys.

We also helped them take all that expensive kit further down the path; they filmed further down, and on the beach. I even confessed to the camera man what my reputation with cameras is. He wasn’t taken aback! And I loved witnessing the process of recording a TV programme. It was a day of much hanging around, but in a good way! The TV crew had even brought home-baked lemon muffins, and the weather was good! Not even mentioning the amazing view. Not bad at all. The hanging around also allowed for some more information gathering; the programme was one in a series on spectaculair British museum pieces, and their background. This one dealt with a Bronze Age hoard that had been found, and this part of the programme would elaborate on the central place Cornish mining played in this era. And this mine was probably medieval at the oldest, but who cares. The presenter was asked as he was of Cornish background. He mentioned too he normally did live TV; he preferred that, as then you don't get to have to repeat yourself all the time... 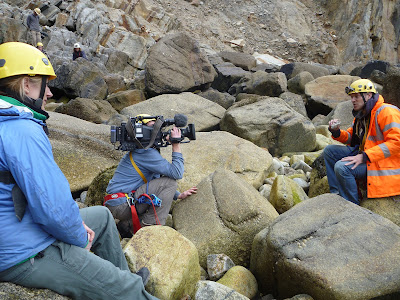 Dan with a piece of tin ore in his hand; the producer (or what are these people called that call the shots) is looking on with a critical eye. Notice the resigned cavers in the background. 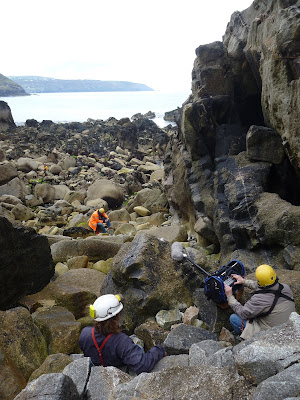 Long distance shot with sound technician hiding behind a rock


Then it was a wrap. The TV crew thanked us for our help and left for the next location. We then got ready for going underground. Some of us would stay at the surface and take all the ropes down again.

We did a fairly quick-and-dirty scurry through the very pretty mine. It had cathedral-height stopes; I always love these! And there was a lot of kit still in there; pulleys, carts, rails, and ore chutes. Lovely! But my early rising was taking its toll; sooner than normal I had seen enough and wanted to get back to the cars. That did involve dragging all the ropes back up. Quite an intense day, altogether! A lot of running up and down the cliff to assist the TV crew, lugging lots of heavy kit, and then the underground trip. Time to go home! 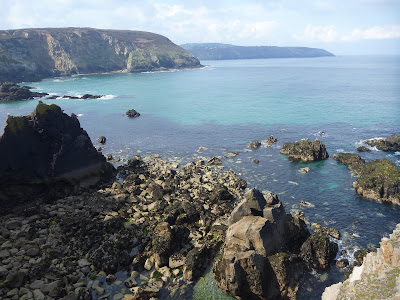 When I got home, more than 13 hours after I’d left it, I was shattered. But glad! And I recommend to everybody to watch “Britain’s hidden treasures” (or something like that), with guest presenter Dan Lobb, on July the 20th, on ITV. I sure will be glued to the screen!
Posted by Margot at 08:50