Run for the county

Divide et impera – it’s an old slogan, but it still works. Draw an arbitrary line between “us” and “them” and let the rivalry begin!

Left: St. Piran's flag, the ancient flag of Cornwall, and right: St. Petroc's flag, the brand new flag of Devon (only designed in 2003!)
One cunning race organisation had come up with the “Devon vs Cornwall” concept. They organised a 10k race near the Devon/Cornwall boundary, and asked all participants to pick a side. At the end they averaged the times of all runners of each side, and concluded Devon had run ~1 minute faster than Cornwall. And to stir up the competition even more, they organised a rematch of 10 miles. I couldn’t make the 10k run, but I was available for the 10 mile version. 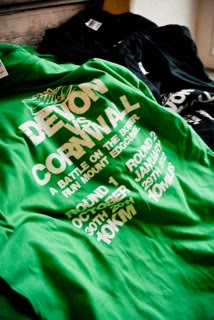 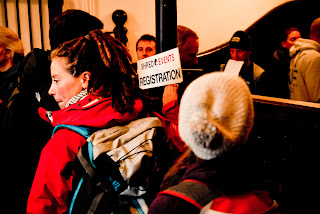 Waiting in line to collect my race shirt. Picture by William Debois for Shred Events

I had felt a bit awkward about having to pick a side; I live and work in Devon, so it was the evident thing to run for this county. But I quite like Cornwall! Where would I be without the Cornish mines, and the Cornish miners? Running in the black of the Cornish flag would make me an imposter, though. So I collected my green Devonian shirt. And blended with the sea of green at the start. Not many runners for Cornwall, by the looks of it! 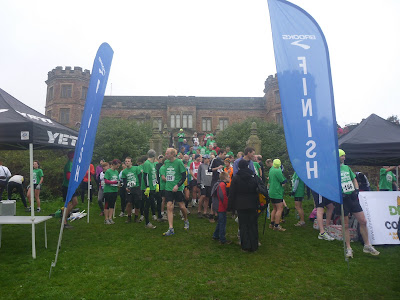 The start went quite steeply downhill; not my forte. But soon we hit the normal Mount Edgecumbe paths again, that I walked on several occasions in the past. On these you can make a rather good speed! And I must have; about 1.5 miles into the course I saw Hugh wasn’t even that far ahead of me. Yet.

It was yet another scenic run… the sea was a mirror, and Cawsand and Kingsand were picturesque as ever, though it was very overcast, and therefore it was hard to take pictures.

For a while I ran just in front of a lady who was running for Cornwall. She clearly had a fan; some woman took pictures of her, shouted encouragements and took over her gloves, who were not needed anymore after 3 miles of warming up. This lady turned out to be her sister… I would see her twice more along the track, and again at the finish. From the second encounter she cheered for me too! Such things make a race extra much fun. 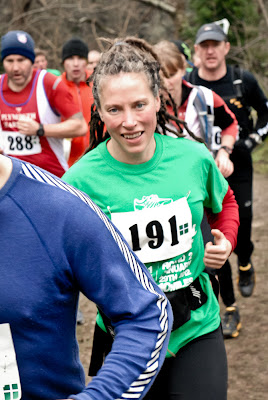 Not everybody ran in county colours! Picture by William Debois for Shred Events

Quite soon I reached the turning point. I still felt good! Fortunately; there weren’t many runners (results indicated there had been 157) and these do get spread out over a 16 km course. For quite a while I just saw one guy in front of me, and heard one behind me. When that happens some of the race adrenaline dissipates away. But that would solve itself…

At some point I noticed the distance indicators (big signs after every mile) had small print... provocative statements as "Cornwall says it has better pasties and ice cream!" or "Devon claims it has better beaches!" That's attention to detail...

When I had about two miles to go there was a sharp turn in the route. I got to see what was behind me. Lo and behold; a young woman in a black shirt! In other words: a rival! She would not only be in the same age/gender category as me, but also run for the other county… I thought I shouldn’t let her get past me. It really works, this divide et impera thing! 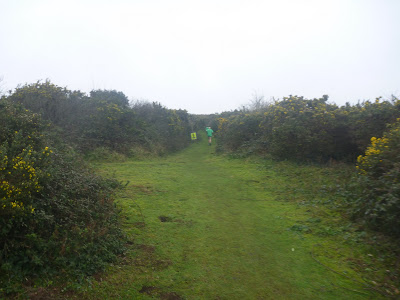 The only vaguely acceptable picture I managed to take during the race
I tried to be fast on the flat bits, and not too slow on the slippery slopes down. And to have some energy to spare for the last stretch: that grassy slope we had started on, which we now had to run up! I struggled up with less and less breath. But I managed! The woman in black hadn’t overtaken me…

The day after, when the results came in, I saw I had indeed finally managed to improve on my previous performance. I had finished neatly in the middle of the field, and within my age category I was even among the fastest 40%. I was quite happy with that! And 1:33 isn’t bad for 10 miles off-road over a hilly route!

After the race Hugh and I buggered off quickly. We managed to get the 1PM ferry back to Plymouth; quite executive, given the race started at 11AM! And then it was time for a shower and a well-deserved pub lunch, this time to be enjoyed on the appreciated Royal William Yard. Another good day!
Posted by Margot at 19:13