“If you guys come across a corpse underground, would you perhaps be so kind as to notify us?” It seems the police had once really phoned the cave rescue team with that request. I wonder what they think we’d otherwise have done!

It does occur that the police suspect that someone who has gone missing might have been murdered and hidden in some abandoned mine or something like that, and ask cave rescue to keep an eye out for them. So far without result; of the four cases I’ve heard of, three were found elsewhere, and one hasn’t been found to this day. But the police want us to know what to do if the situation one day would occur. And, theoretically, underground crime scenes of a different kind could also come into being. So we dedicated an evening’s training to Crime Scene Investigation.

We first got a short theoretical briefing, and then we were supposed to amuse ourselves for a few minutes while our murder victims would hide somewhere. And then we could show our newly learned skills! 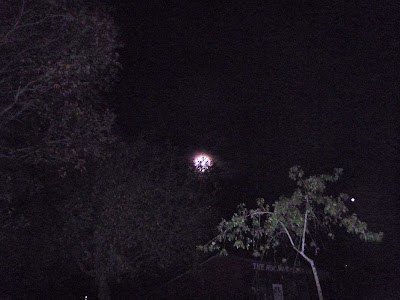 The full moon shone over our crime scenes
We combed out the quarry and the entrance areas of the caves, and after only minutes one of us already found heaps of evidence. At least, that’s what he claimed. He was all enthusiastic about having found some sweets wrappers. These would contain DNA! Most likely that of random passers-by, but that didn’t seem to dishearten him. But fairly soon we had found two stiffs (though one moaned about the weather), and some possible evidence such as a piece of rope, a knife, a piece of duct tape, and a syringe. It would later turn out these latter two were there by coincidence, but that didn’t matter.

Would I ever have use for this? I’m not sure if I hope for it. I can’t imagine it’s pleasant to have to recover a body, especially if it has been down there for quite a while, but it sure would be something different… And murder is bad enough as it is; a murder without a body is even harder for the police to solve, and probably harder for the next of kin to deal with. So we’ll just see if we’ll be called upon. At least we’re better prepared now!
Posted by Margot at 13:46