I now know what the problem was. More or less. And it's a strange problem, but at least I will now know how to avoid it. What was the cause of all my misery? The combination of docking station and powered USB hub. For some reason, these two don't seem to go together. And I think that's strange; one would expect a hub to just work with whatever computer you plug it into. But well, the trail of broken hubs and external hard drives (and mouse! and some memory sticks!) is compelling evidence that at least this specific type of docking station and specific type of powered hub do not collaborate.

My hub had worked fine with the old computer. It had blown upon contact with the docking station. And that made me suspect the docking station might be the problem. I mailed a chap from the helpdesk, and he said "Oooh now then that could be the cause (...)" So we explored that route. A chap from the company that delivers the computers to this university came and replaced it. We tested it, and talked about what the problem could have been. He came up with the incompatibility possibility. Well that could have been it... without the hub it had all worked fine.

I checked the user's manual of computer/docking station. Strangely enough, what they say about the issue is "Certain USB devices, such as optical disk drives and hard disk drives, have high power requirements. Due to the power output limitations of the USB ports, you may not be able to operate more than one such item at a time." If there ever was an encouragement to use a powered hub, so one can run lots of high-power appliances at one time, that must have been it! Even though the chap I was talking to claimed a powered hub counts as a high power device, but I think it basically is the opposite. It's a device that has all the power one may need without needing any itself! So I accept that it was the combination of dock and hub that caused the problems, but I think that's still a flaw in the docking station. It should be compatible with powered hubs. 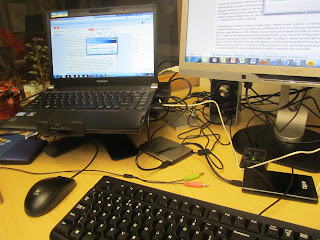 So I'm now back to normal, just using the harddisks that still work, and just plugging them in wherever there is a port; it's veritable spaghetti here. But as I think the damage is not my fault I want financial compensation. I hope I'll get that; be it from the manufacturer of the docking station, the company that provides them to us, or university insurance (preferably not the latter - it's not the university's fault either, if you ask me).  I'll do my best to get that. But I won't buy a new hub with the money. Even though I still think they're marvelous inventions, they're just not a good idea at this very workspace...

It's good to be able to get back to work again. And I'll keep the blog updated regarding the fight for compensation!