Quiet breakfast, or: a convertible in the snow

If you spend enough time with people splashing around in uranium mines, crawling through narrow spaces,
slushing through muddy water of over a meter deep, and dangling from ropes in intimidatingly endless spaces underground, you start to be curious what they are like under more mundane circumstances. So on a sunny sunday morning I was going to have quiet, civilised breakfast with Neil, somewhere on or near Dartmoor. No waders, no helmets, no mud, just two inconspicuous civilians modestly enjoying some nutrition.

The thought of Neil got me in a muddy mood anyway, it seemed, for when negotiating the garden path I fell flat on my face, which did nothing to enhance my inconspicuous civilian look. My antics may, however, also have had something to do with that it had been snowing and thawing and freezing. I managed to make it to the car without injury, and I was somewhat glad I did not have to drive. Driving on ice is piece of cake, but not on summer tires... at some point a 4WD that had given up on a road advised us to not try it as well, a warning we decided to heed. 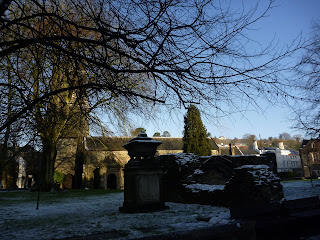 Not a great shot, but I was trying harder to not fall over on the Tromso-like pavement than to get a good view


In a fairly random village we stopped. There were ruins of a monastery to be seen, so we went to have a look at these, and assumed there would be something to eat as well. Another attraction of the village was the pannier market, a somewhat posher version than the Plymouth one. And pannier markets are dangerous. They tend to have second hand bookshops in them. This one did. We did not manage to get past without each buying a book about old crap (or, more precisely worded, industrial archaeology) in the surroundings. Restraining ourselves we made our way to the market cafe: we were getting hungry. 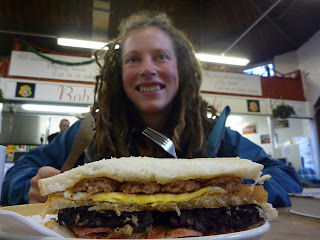 The cafe solved that. Easy. The breakfast they served was very English. Very high caloric, of course. We did what we could with it, and found we had time to go explore some more old stuff. The goal was a church on a hill with a mine beside it. We drove through fairytalish snowy Dartmoor while the church was getting more and more prominent on the horizon. Then Neil looked at the ice on the road, and the gradient, wondering if he would be able to come back up if he would drive down that road. And tried to reverse. With no luck. We decided we may have to abandon this mission, and tried to turn around, getting back to the flatter part. But too late! The car performed all sorts of ballet moves, but did not make it up the hill again. At some point we needed to give up and call the AA (the UK ANWB, or NAF). While waiting for them we could see if we could reach the church on foot... 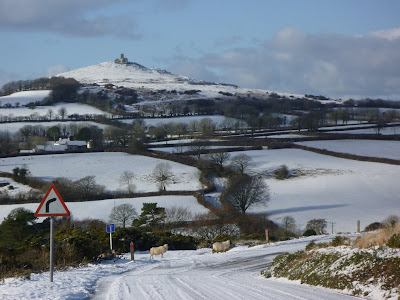 The church in the distance, and some Dartmoor sheep as bonus 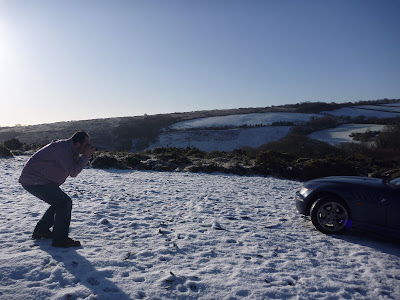 Neil saw the fun, and the photo opportunity, of the stranded car as well 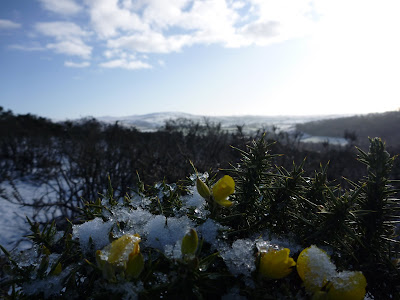 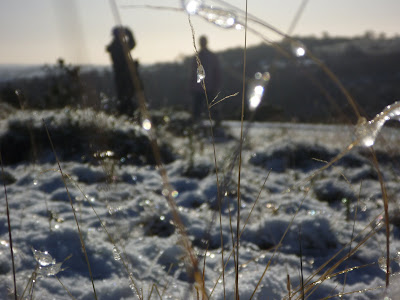 After an excellent walk in the beautiful weather (quote of the day from Neil: "seeing you in bright daylight is very disturbing") we saw the AA van approaching. Much more careful than we had come. It was a 2WD! No way that could pull us out. But no panic; the guy was not discouraged that easily. He let out some air

from the back tires, and helped push. By coincidence a passing elderly couple showed up as well, and helped along. The man pointed out his wife looked much lighter than Neil, so that it would be easier if Neil would push and the old lady drive. I had thought of that before, (I am lighter too), but the thought came along with visions of what could happen if a driver like me is combined with an insane racing monster, and I had discarded that thought. The lady, however, was skilled and fearless, and all together we pushed the car over a precarious, rock-lined hole back onto the road, and onto the flat stretch. Huzzah! The lady could have just nicked the car, but she was too polite. So after the AA man had re-inflated the tires we were on our way again. 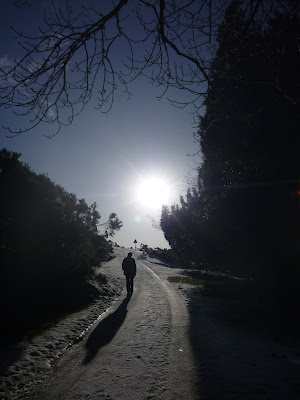 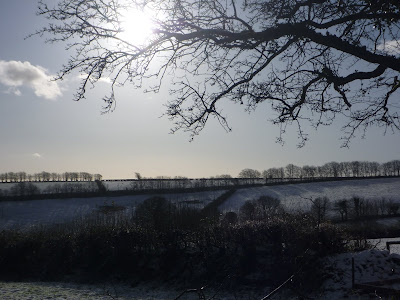 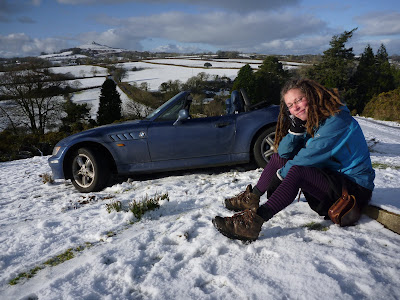 A very staged picture: I was way too busy trying to enthusiastically make beautiful frost pictures to sit in moody resignation beside the car. But who cares...

I could have guessed it would end with strange adventures instead of just absorbing some nutrients, but it was a morning well spent! And on Tuesday we can go back to the normal, dark, muddy, helmet-wearing routine. Probably for the better.