I'm always in the Netherlands over Christmas! And I don't want to lug big trees around when I know I will have to move house again soon. So I never put up Christmas decorations. Not that I had any. Why would I?

Then I bought a house. And it wasn't just a house; there were things in it. Such as: a fruit bowl, a sander, a cafetiere, a machete, a pair of binoculars, and Christmas decorations. And I'm not going anywhere! So now I could have a go at this Christmas malarkey. The house even came with a fir! Rose, the previous owner, had had lots of potted plants in front of the house, to make it look good. One of them was a fir. I could perhaps move that one inside over the Christmas period? But the plants had got a bit neglected. And then we had a drought in my first summer. That made things a lot worse! Among other things, it killed the fir. So much for my Christmas plans. And the first winter the house was still a building site, so where would I put a tree, anyway?

This year I have a living room. And it's great! So I gave decorating it another thought. And figured I could kill two birds with one stone; I would not buy a typical Christmas tree, but just a nice big shrub that could function as such, and then in spring move outside and make the outside of the house look good. So a trip to the garden centre was in order!

So far it all works. I have a plant, in lives in the living room, and it now has lights in it (it's after Sinterklaas so it's OK!). The plant is too small to host all the lights so the book cupboard gets the rest. And I adorned my antler too! I'm feeling all Christmassy! 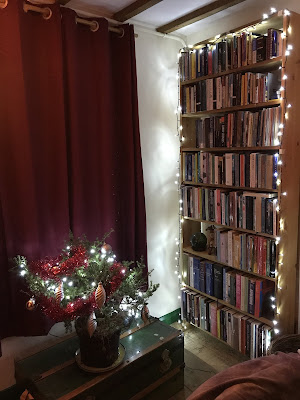 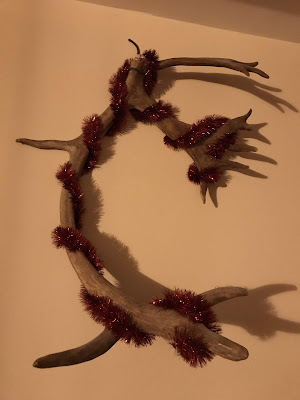