To the Netherlands by train: how did it go?

I was a bit apprehensive about my train trip! I had barely booked it or a massive train strike broke out in Britain. And closer to the date, half of the Southeast flooded, causing big problems for road- and rail traffic. And the French also went on strike! This didn’t bode well. I was glad I had made sure to have buckets of time in London. If one of my trains would be delayed I would still be OK!

Another thing I had not taken into account was buses. I had to get to the station first! But I was travelling out on a Sunday and when I (naively) checked for buses I was reminded that on Sunday, there are none. A disgrace to be honest! But also a cold hard fact. I figured it would have to be a taxi. Until Chris offered me a lift. That was nice!

So on that Sunday morning I packed my bag with inhuman amounts of food and drink. It would be a long trip! And then Chris appeared. He dropped me off. The train was perfectly punctual! So far so good. I got started on the Saturday paper, and enjoyed a bit of looking out of the window. Quite relaxed, really!

In Crewe I had to change. I got out and looked for an information board. And I saw my connecting train was cancelled! But there was another train to Euston about to come in. It was delayed, it should have been gone already! I decided to take that one. But by the time I sat down it dawned on me this might actually be a local train, stopping at every tree. And it was! But I had enough time. And I also wondered if my ticket was even valid for this train. But nobody checked so I didn’t find out. I just enjoyed the touristic ride. I read some in my book. 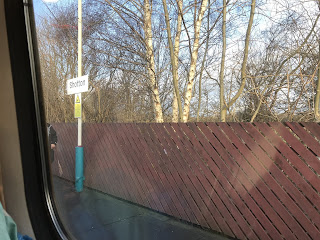 A view from the slow train


With lots of time to spare I got to Euston. Now to get to St Pancras! It’s only a short walk but it was enough to make me feel like an utter country bumpkin. I was smiling at people! And taking pictures!

I found the Eurostar terminal but first went outside for a spot of lunch. It was December but quite pleasant! I had my quiche and a carrot and some tea. And I did some people-watching. And then I went in. They suggest you show up some 45-60 mins in advance. I checked in, had my passport checked, and my luggage scanned. Ready! 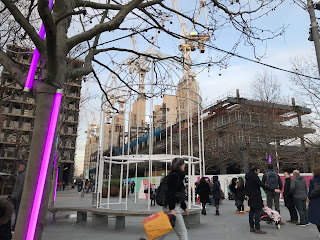 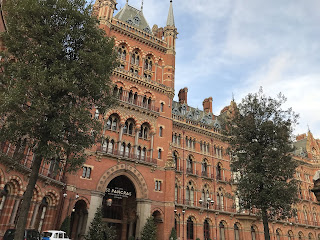 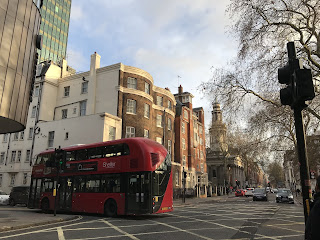 I read some more until the train was ready for boarding. I found my seat next to an uncommunicative man. That was fine! I was tired. I first dozed a bit, and then listened to some radio programs I had downloaded. Some ‘long view’ and some ‘more or less’!

Once in Amsterdam I had to change. I did scan my travel card at the wrong place and got docked €20 but that should be reversible. And then I got the train to Amersfoort.

Altogether it went fine! I will do this again. Maybe with slightly less margin in London. And maybe not on Sunday! But otherwise it’s actually quite comfortable! Goodbye flygskam, and hello tågskryt!
Posted by Margot at 08:30