MOT with guarantee to the door

When I brought my car to the garage for its annual MOT test I figured it wasn't a day too soon. The last weeks it had been especially wobbly and unbalanced. And it's always rusty. This year it of course needed some welding, and then also some brake part, and a new tyre. And that helped! A worn old tyre must have been the cause of its wobbliness as it was a smooth ride once I got it back. Smooth but noisy; I had to go back as some air pipe of sorts had come undone and was kicking up quite a racket, but when that was fixed too I had a fine car again. Coming Queen's Day (or the aftermath of King's Day, this coming year) the old thing will turn 20! A respectable age for a car.

And then I brought it to university to be able to go caving with it. When I was trundling along in a queue I saw a pedestrian point at a corner of my car. Was something wrong? Maybe he referred to the damaged light. But no! It turned out to be a flat tyre. I had noticed it wasn't running as smoothly as it had just after coming back from the garage, but hey, it just isn't much of a limousine. So when I had reached my destination it turned out, to my surprise, to be such heavy damage. But I managed to replace the tyre (remembering from the previous time that the spare is very awkwardly stored away in the back-end of the car) and all should be well. It was actually the new tyre; the garage hadn't fitted it properly. So that was an MOT in three trips to the garage! Not a very good score. But at least by the time I write this the tyre is already fixed, so I'll have a spare when I drive to the airport.

With all that I got quite into the spirit of changing tyres, so I think I'll go and see if a local scrap heap has a nice second-hand tyre to replace the last one which looks worn. A second-hand Fiesta tyre can't cost much, and it's a good idea to have some thread. Me in a car is dangerous enough as it is with good tyres! And after that I hope for no garage trips until this 20th birthday! 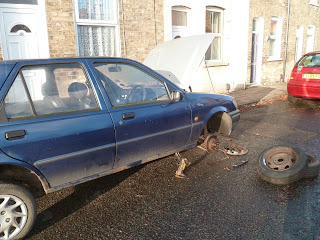 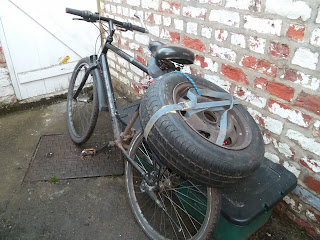