We hadn't seen the sediment we just had spent several thousand pound on. The drillers produced closed, opaque PVC liner with the sediment in it. We'd have to split the cores using a core cutter in order to see what we had!

Durham has a fine core cutter, and it has fridge space (quite unlike York), so it was Durham-ward the cores ventured, and where I followed a while later. We started with the core on which not as much depended. We did have to tweak the machine a bit; the saws and blades doing the cutting have to be adjusted rather precisely to get the desired result. We had it nailed by the time we started on the master core. 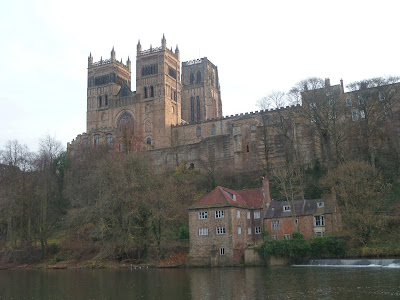 A perk of having to come to Durham: it's about as beautiful as York!

The sediments are beautiful! They are just what we had hoped. We had to use an actual band-saw to cut through the peat section; peat sounds very soft and cuttable, but this is old, compacted peat, and it is rock hard and flaky. But in the end we had a whole pile of beautifully split, photographed, described and wrapped core halves. Success! By the time we had that the day was done and I had to go home, so I'll come back later to sub-sample them. But at least now we know what it is we'll sample.

We even managed to clean up the mud, the wax, the black water, and everything else that had been dripping out of our cores. Those who remember the pictures of the fieldwork won't be surprised there was a fair amount of oozing going on in that lab! But everything that leaks and drips is now gone. My return to sub-sample should be a very civilized affair... 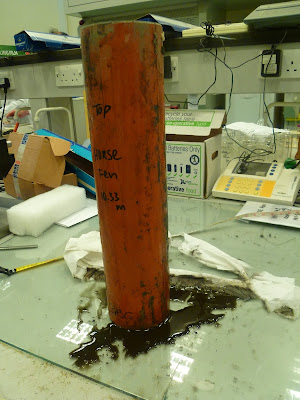 The core with the crucial contact in it! Which happened to coincide with the water table...