Single Rope Technique. It sounds fairly vague! There are endlessly many things one can do with a single rope. But in this precise wording it refers to getting up and down a rope safely. The technique seems to have been developed by tree workers. Some biologists for instance study the canopy of rain forests, and well, one has to get to that canopy in some way or other, and then down again as well.

I was used to ropes only as a safety line and a means of descent. If you climb, you do the going up on rock. But cavers need the rope to ascend, as well. No use, for instance, in trying to climb that 60 m vertical shaft we did last Sunday, and especially not with lots of kit dangling from you, and soaking boots and clothes, and a bag with lunch and whatnot in tow.

So I’d done some SRT. One descends into a dark pit, and later climbs out again. Bob’s your uncle. But there’s more to it. It might happen that you explore a mine, and lower yourself in unknown territory, only to find out there are no safe places to go. The only thing you can then do is ascend again. And in itself it’s not difficult to dangle from a rope, and there get your ascent kit in position, remove your descent kit, and go back up. But it’s better to train it in a friendly environment.

Sometimes a rope also has to have several fixation points. Because it needs to go around the corner, for instance. Getting past such a point in a safe manner is also something you want to calmly practice, before you end up having to make it up on the spot in a dark mine after 10 hours of exhausting exploration. 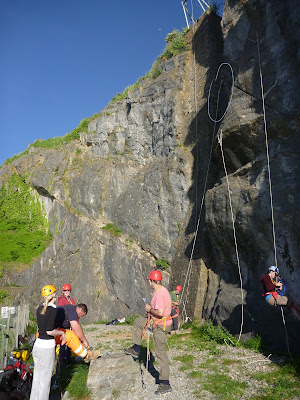 The Mountbatten climbing wall that we could use for our purposes. In the oval a re-belay is just visible. 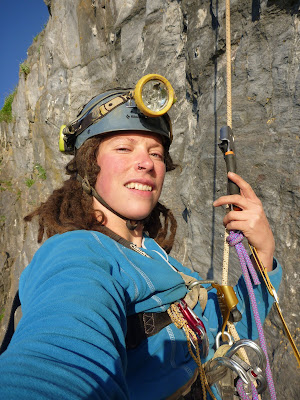 Me happily dangling from my two ascenders 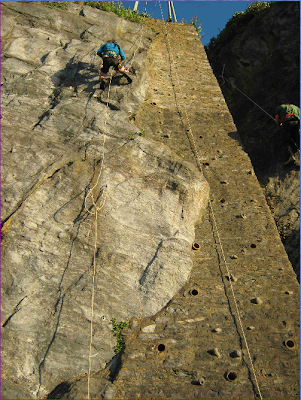 Me see from below. I'm making my way past a re-belay; notice the rope above me is slack. Below me there's another one. Pic by Dave
I want to be able to do any accepted rope travel, so I was very glad the PCG organised an SRT training evening. I started practicing the direction reversals on a rope. There’s not very much to it, but it was good to try it in such relaxed circumstances. Then it was time for going up a rope with a few re-belays; some more anchor points, often at some lateral distance from each other. It’s a bit of faffing around to get past, but I have a routine now! At some point I heard voices from below shouting goodbyes; some of the less addicted had had enough training and left. And then, when I had just made it down past a re-belay, Dave shouted from below if I could perhaps move back up, and take out all the re-belays on my way. Well yes why not. I ended up on the top, where I found Ferret taking all the kit down, and this time we took the stairs to get back to Dave and Ali. Exercise over. 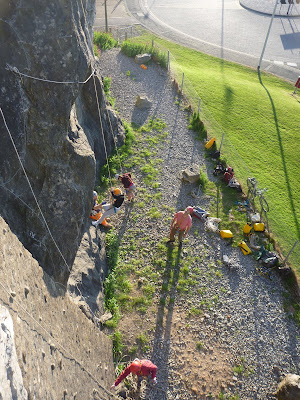 From up there I could keep an eye on my bicycle
That of course left us time for a pint. A deserved one! I feel up to all kinds of underground rope antics now. I hope it comes in handy soon…
Posted by Margot at 18:01