Devon balances on the edge of western civilization, and Cornwall is beyond it. True? Probably not. But the Cornish cavers are definitely wilder than their Devon (Devonian? Grammatically correct, but looking wrong in geological eyes) counterparts. They don't venture out often, but when they do, they go for it. I got a taste of that in April, and I wanted more! Luckily I was welcome, so on the sunniest day of the year so far I was sitting in Dave's car on my way deep into Cornwall. It would be a Devon-dominated trip, as Dave's car also held Lionel, and PCG veterans Hugh and Trish were on their way in their own car. We were to meet only three Cornish madmen; Mark and Mike who had also joined the April trip, and Preston, who I had never met before.

Both teams had brought a rope, and that was no over-indulgence, as access to this mine was through a 60m shaft. And even down it saves time if you can go with two people at the same time. I had a brand new descender; Dave won't let me descend on an "eight", as these don't necessarily stop you if you let go of the rope. A descender does. But that's not deemed enough; nobody goes down on Dave's and Lionel's shift without the rope also going through a screw karabiner. And altogether you have so much friction you are very safe, but that also means you have to manually feed the rope in order to go down, so even that takes time. I went down with Mike, which went quite fine besides him landing on my head.

As was the case with the previous weekend trip we could leave our SRT kit at the entrance, and continue unaided. There was a lot to see! Within no time we ended up on rickety planking with rusty tram rails and an abandoned cart, precariously balancing above a gaping hole. There was a strange movie set feel about it. And this was only the beginning. We moved on, and found ourselves in a surreal and versatile world. In places it was just fairly ordinary tunnels, but mostly it was large halls with abandoned ladders and soaring ceilings, or ominous rooms with ubiquitous collapses and menacingly weakened beams, otherwordly tunnels with fractal rust stalactites or a layer of bright red, highly acid water; small passages with glittering crystals, or eerily coloured trickles oozing from the walls and snottites hanging from the ceiling. We found unfathomable shafts, some used as garbage dumps; wooden bridges over orange pools, copper-blue stained walls, traces of disappeared passages, soft-floored tunnels turning back onto themselves, and much more; about ten hours worth of a world I knew could not be caught in word or picture. I try here, anyway, but it's a pale attempt.

It was a good team to roam this expanse; the other seven were all veterans with lots of knowledge about this mine, and mining in general. And group spirit was strong. Mines and caves tend to have some tricky bits, and there was always a helping hand available where needed. And where not needed as well, quite often. Many people have expressed their surprise at spending such a sunny day underground, but I couldn't have wished for something better!

Time flies when you're having fun, and by the time the first duo went up the ropes it was approaching nine. Getting  eight people, not all of them youthful and athletic heroes, up a 60m rope takes a while, so by the time we were all out we did not go for an after-mine pint, but set off in the directions of home, impatient significant others, and/or dinner. The latter would prove a bit of a challenge for Dave, Lionel and me; try to find something to eat in rural Cornwall on a Sunday after 9PM. It's not happening! So we settled for a pint on the way, and thoughts of whatever edible substances we expected to find at home. And at 11PM I was back in my own kitchen digging out some quick fix, and polluting my bath with my filthy kit from which I tried to rinse the acid. I was tired and hungry, and I smeared mud all over my house, but it had been entirely worth it! 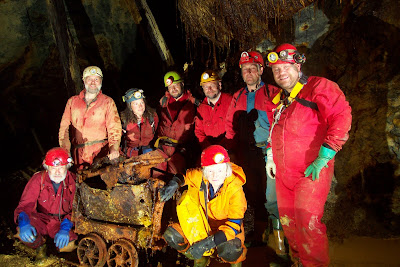 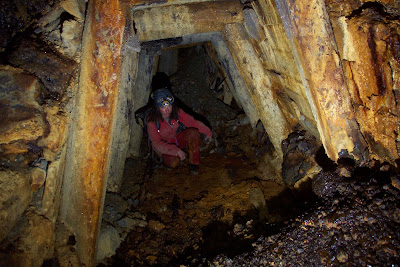 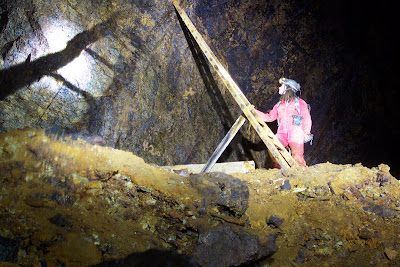 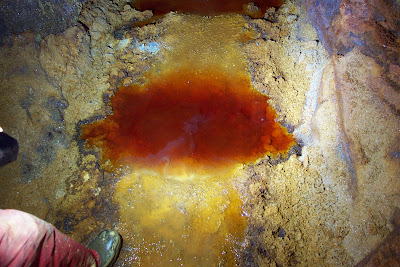 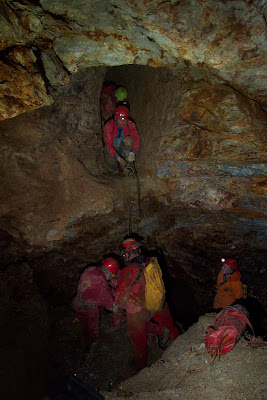 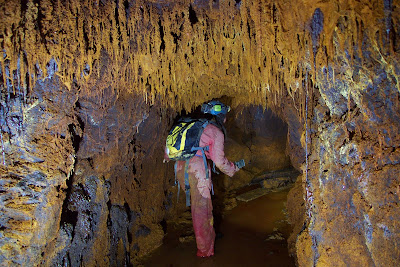 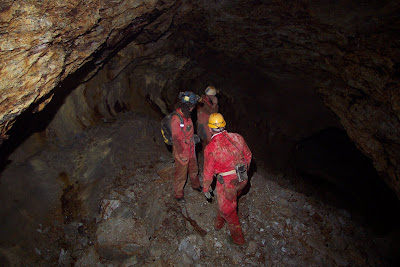 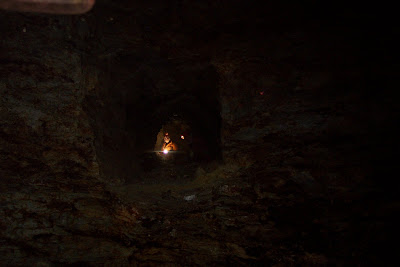 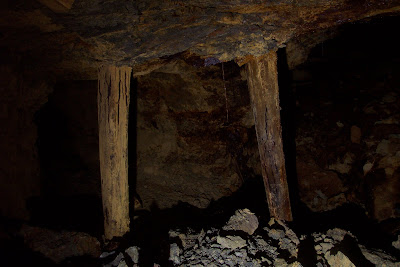 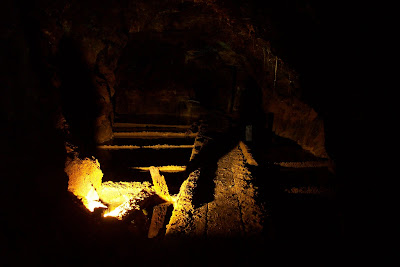 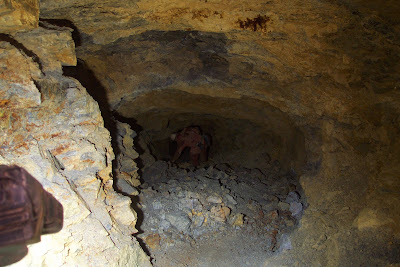 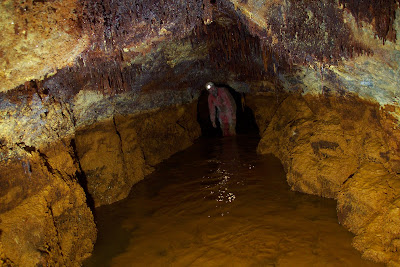 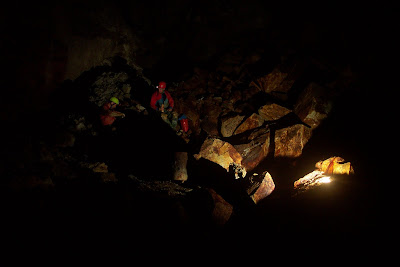 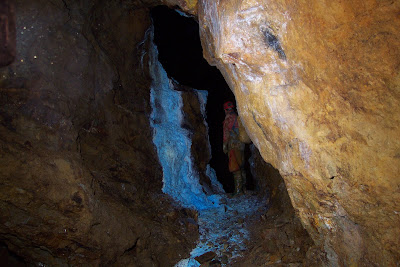 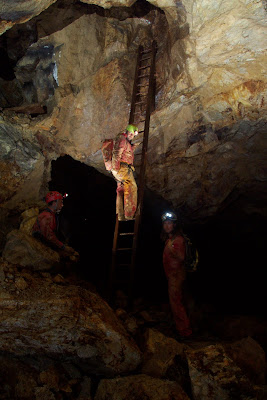 I let the pictures speak for themselves. Except the one of the bridge, of the people trying to climb into a partially collapsed tunnel, and of the men having some lunch on a block field in a large room they are all taken by Dave.
Posted by Margot at 09:55