When I lived in Amsterdam I sat on my arse. When I moved to Norway, all sorts of opportunities for more interesting things presented themselves, and before I know it I had gotten hooked on being in beautiful places, and doing scary and/or physically demanding things. It’s the short route to getting happy! So that’s what I’ve been chasing in the UK as well, even though it’s much harder. There’s less beauty available, and there’s not many people who can challenge you in either way. But seek and thou shall find! Caving already provides me with all three things. But you’re hooked or you’re not, so that’s how I ended up running with Jon, and desiring to restart my climbing career.
Climbing, when outdoor, is almost by definition an activity that takes place in beautiful locations, and that is both scary and physically demanding. And those who cave strongly benefit from some additional climbing skills. So that sounded like a no-brainer! The problem is, though, that one can’t climb alone (bouldering excluded, that is) , and that’s even more poignant as here in the UK bolting routes seems to be sacrilege, so you not only need at least two people, but also at least one who can lead natural routes. And I can’t.
I had already spent months nagging at our sports hero PhD students Rob and Duncan, who can both do that, but they are busy or in Wales all the time or hindered by physical discomforts of plain hung over or all sorts of things, and nothing happened. Very English, but (or thus) not very satisfying. And then we had a committee meeting of the caving group. And while enjoying a beer afterwards I mentioned that. And immediately Ali, our rope magician, said “oh I like climbing too, what about tomorrow night?”. Very un-English, but hey, he’s a caver, so of course he is. And the next day we indeed went to the nearest climbing area (the one I had recently spotted from a distance). It was beautiful weather! 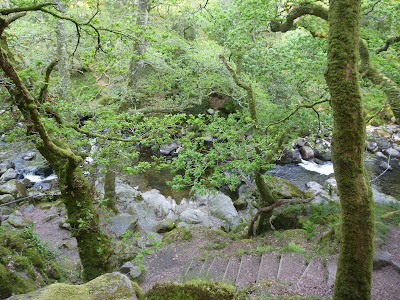 The view from where we started
Ali hadn’t climbed for six months, and my last climb had been the beautiful weekend with Rafael and Tjarda in June last year, so we started calm. Plenty of easy routes! We did a nice four-pitcher in heavily weathered granite. And it was not the most challenging climb ever, but I enjoyed the scurrying along a rock face immensely. And after months of muddy caving I indulged in having proper friction on the coarse minerals! 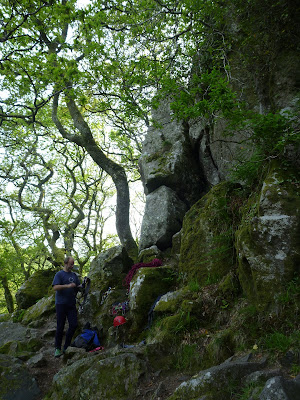 Ali getting ready
Ali had a more cave-like challenge in mind for after this climb. A large lump of granite split in two. And it’s (at least theoretically) possible to move from one side to the other. The crack is slightly V-shaped, so the bottom is too narrow for a human, and you have to wedge your body in and worm sideways above the ground... I didn’t manage. Ali got quite far, partially thanks to his larger feet. But it was fun to try. 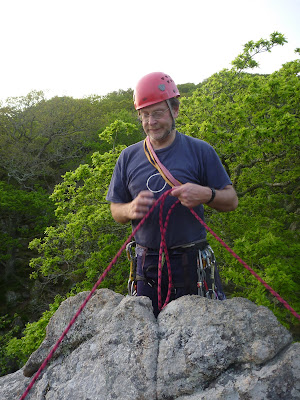 At the top of the four-pitcher
By the time we emerged again it was getting dark, and we went back. A modest start, but there may be plenty of opportunity to follow up on this! And now the thing to do was to have the standard post-activity pint. Or half pint, as I was driving. This was consumed under the pink evening sky with swifts hurtling past. Not a bad evening at all! 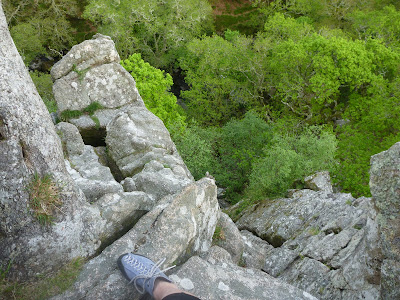