One of the modules I was supposed to teach in is called "Estuary and Shelf Sea Processes". Does that sound riveting? I don't think so; that title doesn't even float my boat, and I'm quite the shelf sea nerd. My job in this module was to talk about shelf sea history. The best part! I hope I made it riveting. I was a bit surprised at how it went; I started with a recap of what I knew other people had already been lecturing about. And scores of students took notes! It was meant as a recap. But then again, I had about half the students; maybe this cohort does not have the habit of actually showing up. Although one might suspect it's pretty much always the same ones that do show up.

So what did I talk about? The interesting thing about shelf seas is that they are shallow, which might have more implications than one might think. Most of the tidal energy created by sun and moon is dissipated on the (frictional) shelves. And due to the shallowness, both tides and winds can mix the entire water column. The open ocean tends to be stratified; the upper layer is warmed by the sun, and thus less dense. Only creatures that can swim can get from the sunlit, low-density layer to the cool dark layer below, and back. And the photosynthesising types of plankton often can't, and they're the base of the food chain. So they eat the scarce nutrients there are, die, and if they then sink down into the lower layer they're out of reach. When the surface layer gets too cold it tends to pretty much sink all the way down; if you are a small plankton specimen and you get sucked along you won't be seen again any time soon. Neither will the substance you're made of. 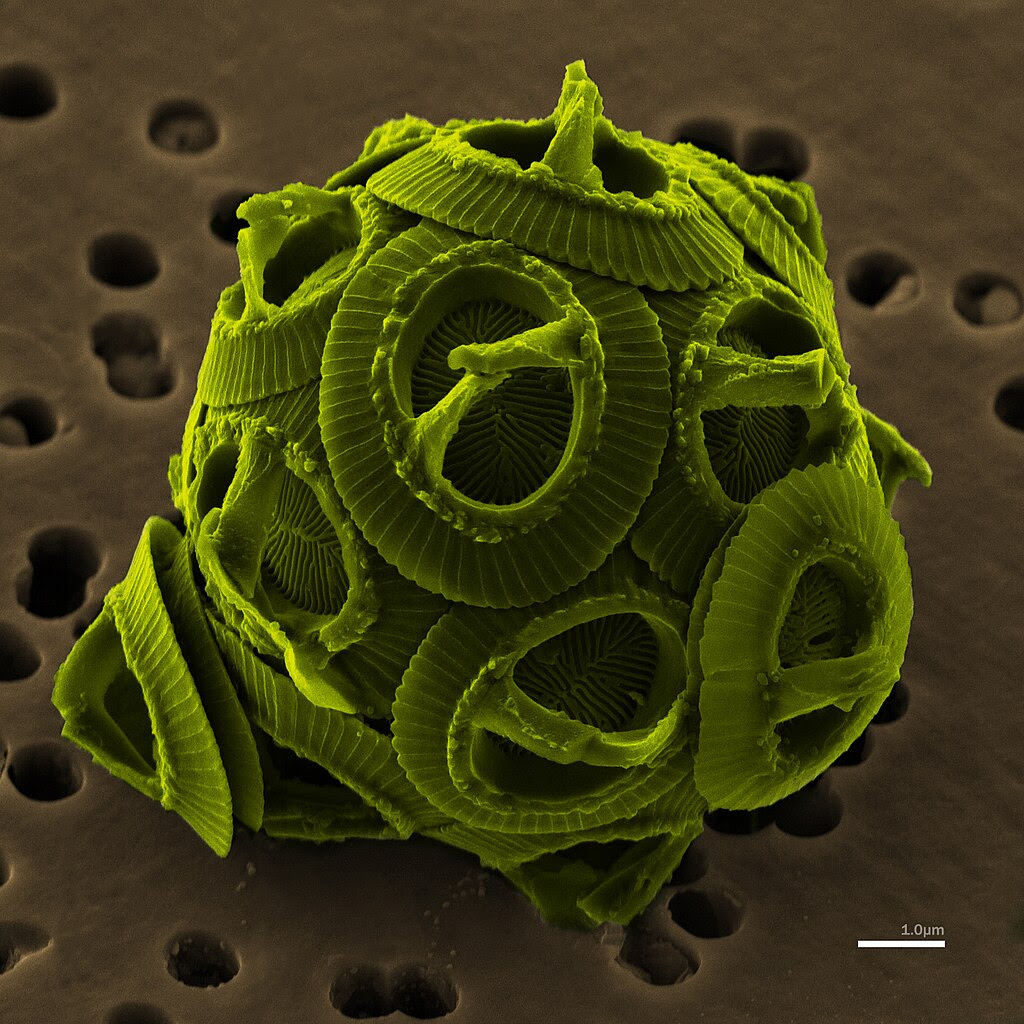 A coccolithophorid; one type of phytoplankton

On the continental shelf you tend to sometimes get stratification and sometimes mixing of the entire water column; in summer the sun is strong enough to heat up the upper layer and get a similar situation as in the open ocean, but in autumn the winds and tides win, and whatever nutrients sank down during summer get stirred up again. And with rivers and wind-blown dust and all, you already have more nutrients to start with. So a disproportional part of global productivity happens there. And with the base of the food chain sorted the rest follows.

Most people will be indirectly aware of this pattern of stratification and mixing; ever wondered why there is such a thing as the spring bloom? Plankton is not like trees, which always have access to nutrients, and bloom when there is light and high temperature; they float around in water, and only when that contains enough nutrients while it also receives sunlight, can they go and reproduce en masse. So when does that happen? When stratification sets in. During winter all nutrients from the sea floor get stirred up, but the stirring also draws the steerless phytoplankton (the photosynthesising kind) down to dark depths where they can't function. And the turbulence will sometimes bring them back to the surface, but not long enough. The moment stratification sets in the creatures who end up in the cold dark deep layer can but say goodbye to their mortal coil, but the ones in the upper layer now get the time to eat all the nutrients floating around, while basking in the sunshine. Voila; spring bloom! You might guess this process is rather important, and it is worthwhile to study it in the past, as you can't really understand what goes on in a shelf sea without knowing about whether your water column was stratified or mixed. So I talked about reconstructing it, and modelling it. So now they know!

It went rather well I must say. They were observant and responsive! I hope they do well on the exam. And having done these two lectures I have most of it out of the way now. Only a revision lecture on ice and oceans to go, and then the term is done! Lecture-wise, that is; there's still more than enough marking of assignments, and of student presentations. Next term will be better! I think...
Posted by Margot at 17:56