Should you have a car if you need it about once every two years? Maybe! The Devon Cave rescue Organisation does not get many call-outs, but we make sure we keep our skills honed for in case we are desperately needed one day. So we train every month. And most of these training require stretchers, ropes, resuscitation dolls, underground radios, or whatnot. So somebody has to go to the store and get all that. And if there's a call-out, someone really needs to get to our equipment storage quickly. And it tended to be our practice officer who ended up lugging stuff around in his private car all the time. Not ideal! Buying a team trailer was considered. That at least keeps team and private kit separate. But then we were offered an entire Landrover for much less than a trailer would ever cost... to be precise: for £1. Who could resist that? Yes we've managed fine so far, but sometimes one should seize opportunities. So even though such a car would require a parking space, perhaps lots of maintenance, insurance, and whatnot, thereby making it more expensive than that one quid, we decided we would go for it. And it's cool, too!

It was the Kendal Mountain Rescue Team that needed a new vehicle, and offered us the old one. Behind the scenes, it had been handed over, and give a make-over to make it a proper DCRO car. And now we would be presented with it. We combined this with a training in Kents Cavern; more about that in a later post.

Floodlights were ready for our vehicle to give acte de presence. It arrived with flashing blue lights and siren! We were all very impressed. James Hull of Kents Cavern handed the keys over to our chairman Brian, and then we could all go and admire it. A bit strange they did all that in the shadow of the car; not good for pictures! After the training we did a little photo session on the other side of the Landie, though not all of our members were willing to pose.

If someone now gets into trouble underground somewhere, we can show up with all our kit in less time, and get the casualty out in less time. And with more style! I won't be driving it; they asked for drivers, but I'll be buggering off soon, and I don't have the desired experience in driving 2000kg+ vehicles. But I trust our dear team will have a good time with this new toy! 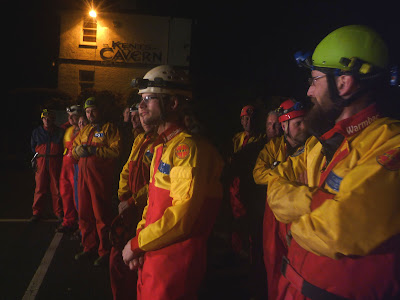 Admiring glances in the direction of the Landrover

Was it Gandalf who gave a speech? No, our very own Brian, who unfortunately suffered from a back injury. 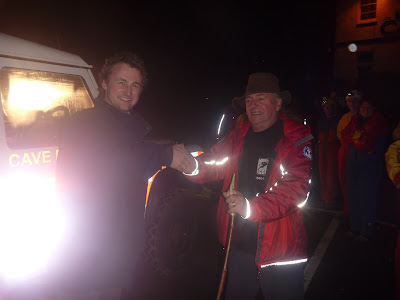 James Hull of Kents Cavern hands they keys over to Brian, this time looking like Brian 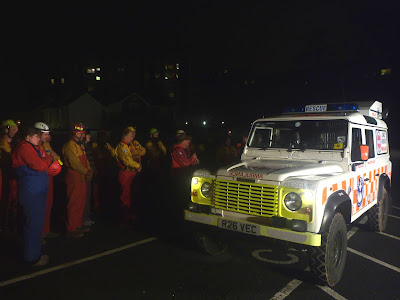 And this is the beauty! 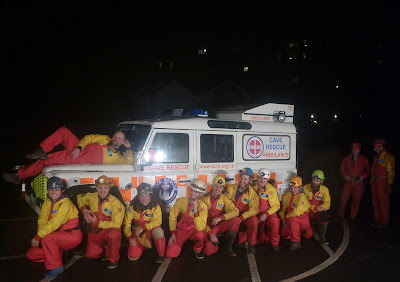 And we're quite handsome ourselves, come to think of it!