“That’s not a proper knot!” We were in Kents Cavern, looking at staged scenes of underground incidents, after having all swooned over the new team Landrover. We had done a few trainings in CSI before; we had practised searching areas for clues while not stomping all over the place and obliterating things such as footprints of suspects, and trying to get an idea of what happened from the clues we found. The thought behind this was that as cavers we might come across crime scenes, either by accident or on request, and we would have to know how to act in such a situation. You might come across some lone caver that slipped somewhere, and fell to his death. That would, of course, be an accident if it happened that way, but an unexpected corpse is always the scene of a potential crime until the police has ruled otherwise. And we sometimes get asked by the police to look out for missing people; it’s not unthinkable a southwestern murderer would dispose of a body underground.

This evening would be the denouement of these trainings. This time, we had actual police crime scene experts (I suppose they would automatically also be accident scene experts, as it is vital for their work to be able to distinguish between the two) with us, looking at how we managed. Depending on how we performed, they may decide they can leave a body recovery to us, if it for instance involves tricky rope work. I thought the main point was to convince them we would not thrash a potential crime scene, and would indeed find all the clues present, but I came to realise there was more to it – they were there to see what we would see that they didn’t. It’s one thing to know how to put a body in a body bag in a way that preserves all the evidence and excludes the possibility of contamination; it’s another thing to recognise a way of rigging that is not up to standards.

The first scene we found involved an invisible body in a belay belt, and some rigging. It took some suspense of disbelief to reconstruct what had happened here; the body had fallen to his death, but the ceiling was so low that could in reality hardly have happened. But we figured he had been climbing, attached to a rope in a Y-hang. The Y-hang would consist of a loop in the rope on one side, and of a sling on the other side. It had not been symmetrical, and a fall had landed on the sling, which had snapped. The full force of the fall then landed on the other side of the Y, where a karabiner broke under the sudden jolt. An accident, evidently; but an accident can still be a crime, if it is due to gross negligence.

We also found someone who had gotten lost underground, and whose light had in the end gone out; he had also gotten cold, hungry and thirsty, and died of exhaustion and hypothermia. And a murder victim that had been dragged in, leaving a trace of lost items and fragments of clothing and whatnot. And another rig, where again a rope had snapped. 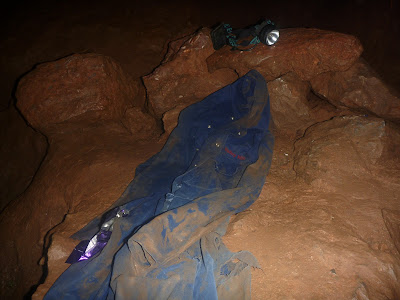 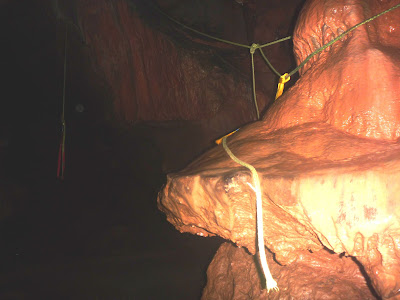 Our second (staged) climbing accident: dodgy rigging in the foreground, and a snapped rope in the background

The constable we had with us was quite pleased with our performance. He didn’t know enough about rigging to recognise a failed Y-hang, and didn’t know what sort of knot you use for tying a rope around a rock. I think they’ll be in touch when something terrible happens underground! And during the de-brief we were pleased to hear it had taken quite some effort, and two Landrovers, to produce the broken and stretched karabiners… that may be one of the reasons why such incidents as we imagined that day are so rare!
Posted by Margot at 22:29