After my day in the office I was looking forward to the last day we would be in the field. We would try to take a sediment core! We need that for my assignment. And there was no guarantee we would get one. We have had lots of material problems with coring in recent years. We also didn't really know what we would find. We had seen some results from the BGS, but they tend to be more interested in the bedrock, so you get a bit of a simplified image of what they have cored up in order to get to that.

As the coring can happen during any state of the tide, we didn't have to get up early. The bus left Bangor at 8:30. And at the site, we split the students in two. Half of them came with me, and half went off with the geophysicists. In the middle of the day we would swap over.

I spoke a bit about my we were coring there, and what we might expect. And then the technicians started the engine. The first section came out nicely! And we cut it. And then the great reveal happened. So what did we get?

We only had some 12 cm of saltmarsh sediment! And below that there was only sand. Homogenous sand. That is not very good for environmental reconstruction. But that is what we got!

I first explained to the students how they should log this section, and set them to work. When they were done, we cored a second section. That was only sand! So that was quick logging. We also cored a third section, but lunchtime was approaching, so I decided to leave that and opened. That reveal would be for the second group!

We sat down with our sandwiches, and then went to the gate where the bus would drop off one set of students and pick up the other. The only staff there were Katrien and I, but some decisions urgently needed to be taken, so we just made an executive decision with the two of us about a new deadline for the students handing in their field notebooks, and for what we would do the next day. That was our contingency day, and the students had indicated they needed time to work on their notebooks, so we just decided there and then that they would have that time, and that we would be contactable online to help them with questions. I am sure the other staff would be happy with that.

With that over, it was time to finish off this coring! But when I started talking to them I saw some munch desperately on snacks, and I found out they hadn't had lunch yet, so I gave them half an hour for that first. And I thought it would be nice to 1st see the coring in action, and only then open the core section that was already ready, so we got the percussion drill in place again.

After having cored through 3 m of suspected sand, the going was tough. It took a long time to get the barrel down another metre, and it took pretty much all the staff hanging from the drill with our entire weights to do that. Sometimes you get to know your colleagues well on fieldwork! But once it was down, the hard work had only begun. Now we needed to get it out!

With two people on each lever, and a lot of stubbornness, we managed to get it up. We had also slightly bent one of the pieces of metal! But some hammer action sorted that out. The work was still not over, though: we needed to get the liner out of the barrel. And that means screwing off the shoe and the top, but the threads had suffered a bit from the onslaught of the coring. The technicians grabbed all the heavy tools they could find and started working on it! And in the meantime we cut the core section that was already waiting for us, and I started core description with the students. It was another metre of homogenous sand! Needless to say this was quick section to log. This group managed to log all four sections (in the end, the technicians got the core liner out, so we had an additional metre of homogenous sand). I think I might need to do another recce before we go out there again. Maybe a location bit further down in the estuary would work better. It would pose logistic difficulties, but it might be worth it! 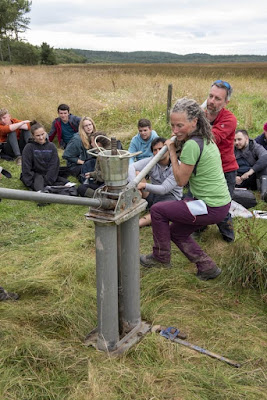 Muscling the core barrel back up; pic by SOS 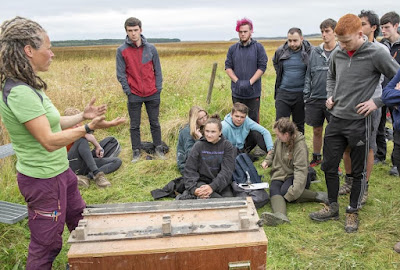 It's finally out! So we can split the previous section; pic by SOS
When we were all done we went back to the parking lot, and then to where the bus would arrive. That would bring the geophysics students. The coring group could then just join them and be brought home. But when it arrived, there was a little bit of time left, so we asked all the students to get out and did a bit of a debrief. We thank them for being such a great group on this trip in which they had basically been guinea pigs. And they thanked us for pulling it off. It was all very nice! And then we waved them goodbye. The day after we wouldn't see them in the flesh, so this was the end of the actual fieldwork! First episode in North Wales done!
Margot at 08:10