One would assume that going to the Netherlands by train is quite the same as coming back by train! But it is not. It already started in Amsterdam! I expected that to be similar to London. You get there in advance, have your passport checked and luggage scanned, and then get in. But in Amsterdam, there was a terminal, but it was closed. I just sat down on a bench on the platform. And when the train came everyone just got in, like it was the train to Hoofddorp. And everyone was confused as the carriages didn’t carry numbers. Everyone had to either guess or ask. A bit of a mess! And it also meant I had been early for no reason. I could have arrived two minutes in advance! But one learns. Next time I know. 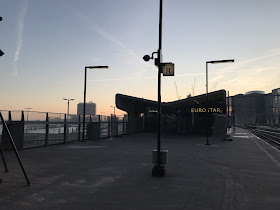 I soon realised why. I had to change trains in Brussels! And that’s Schengen. London is not. So it was during my 40 minute stop there, that all the checks had to take place. It only just fit! I had about a minute to spare. I suppose it didn't help I had my mother's Brompton with me. She doesn't use it anymore so I gave it a new home. And that made travel on busy trains a bit trickier! And it's now been X-rayed...

The trip to London went well. There I got out, sorted out my luggage for the trip to Euston, and set off. And there I got a bit claustrophobic. I wanted to be out of there! Luckily there was a train going to Manchester, stopping at Crewe. I took it. My ticket allowed me any route! By then I was sweaty and tired and a bit fed up. The travel in the other direction had been a bit more serene!

In Crewe I found the train to Chester and in Chester I found the train to Bangor. It was rush hour! The train was packed. This was quite unlike the calm way down when I was sitting in spacious trains sipping tea! But I did get home. Chris gave me a lift from the station. I was quite done travelling by then! It was good to get home.

I still intend to do it again next time! But I should make sure my schedule is optimal. With not scheduling much time for getting into trains that won’t leave Schengen, but having enough time for trains that will. And keeping my luggage modest!
Margot at 07:50