The first weekend I could go wherever, I went nowhere. But the second weekend I took the opportunity to go and see my friend Kate! And we would go for a walk. She suggested the Rhinogydd; I thought that was a good idea, as I had been only once, on a Swamphike, and she hadn't been at all. It's a bit of a drive but hey, we finally could again!
She suggested we might want to share a car. Crikey! I hadn't done that in months. But she has a sizeable car, and as well, air pollution make some more susceptible to Covid, so avoiding unnecessary fuel burning is quite topical these days. And will the exhaust fumes get diluted in the wide rural air here? Well yes. But still. I drove to her place; the first time I got there! I could immediately see what had attracted her to the place. She couldn't show me in the inside but that will come some day in the future. For now I admired the outside, and then we both donned masks, got into her car (me in the back), she opened the windows, and we were good to go.
It was a bit of a drive! Especially as we approached the hills from the west, while coming from the east. When we got close we saw a sign 'parking lot closed due to Covid'. Oh dear! But it wasn't true. We parked and got ready. I saw we had camped right here during the swamphike! But for now we would go off in the opposite direction. Onwards to the Roman steps. 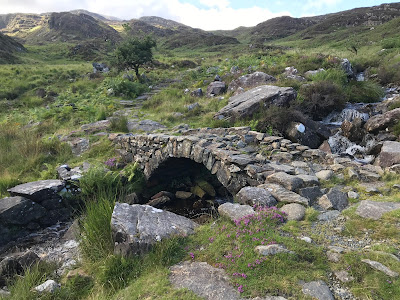 Close to the start 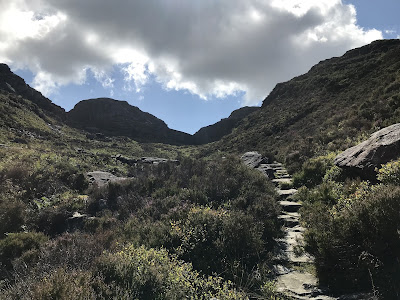 The Roman steps! (Which aren't Roman)
We got over the steps and to the top of Rhinog Fawr. We didn't do any summits during the swamp hikes due to the combination of big bags and high winds. Now we would make up for it! We enjoyed the views from Rhinog fawr (and some lunch) and then made our way done. It was challenging going, down steep slopes and over scree slopes and whatnot. And then through a swamp, and then up Rhinog Fach! Another summit. But by then, most of the afternoon was already gone. So from there we just stomped back. Coming down Rhinog Fach was again a fair amount of carefully picking your way down a steep slope with lots of loose rocks. By the time we were down we had done enough of that! Luckily, we were soon on a clear path, on which we did a small detour to the white waterfall, and then back over the Roman steps. It had been a long day! 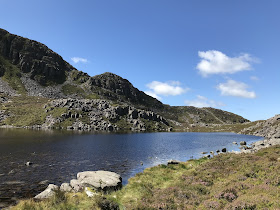 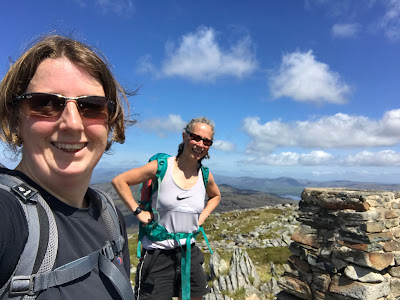 On top of Rhinog Fawr. Pic by Kate 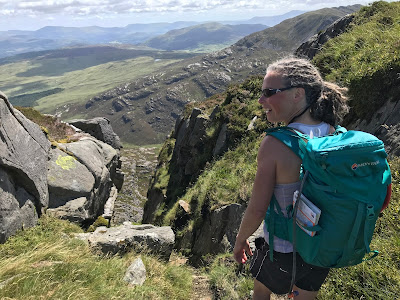 A gorge we descended. Pic by Kate 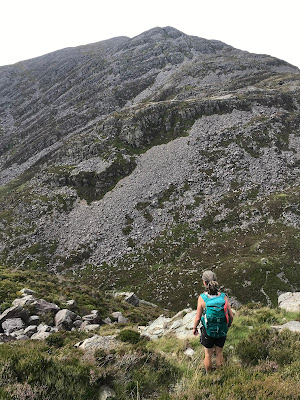 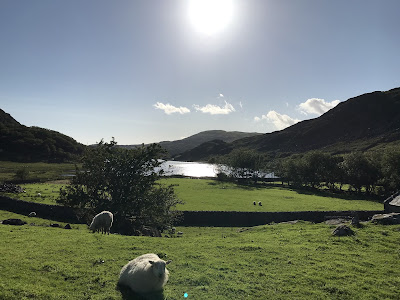 Almost back!
We drove back. By the time I got to Kate's it was 8.30 or something and I was getting hungry. I didn't linger; I got into the car and started the engine. Or tried to. Oh dear. It made very scary sounds! And didn't start. Kate knows more about cars than me. She suspected problems with the starter engine. To be honest, so did I. This wasn't a battery issue! We tried and tried and tried and then gave up and phoned the AA. Kate made me a cup of tea and heated some pasta bake up for me. That was very kind! I needed some food by then. And then the AA came. And of course, the car started in his hands. Tsk! Always like that. But the funny thing was he recognised me, and remembered my Citroen! That had once had a flat battery and he had sorted that (now I know the neighbour has a gadget for that, and maybe I should have one myself). But anyway; I could go home now! And I did. It had been a long day! But it had been good. It's nice we can do things like this again! I expect we might soon even have several households together, and/or go inside people's houses...
Margot at 06:41