My birthday fell on a Sunday. I didn't want to spend that day marking! I rather did something nice with friends. And when friends are needed: call the Thursday Nighters. And we still had our pet mine to explore to the end! The idea came from David, who is quite keen on the place, but I thought it was a good idea, so I went with it. What we wanted to do was a few-people-only job, so it would go well with a small birthday audience.

The last time we had made our way to the top, where a small ledge lead to a level that was blocked up with rubble. We wanted to have a prod at that rubble; maybe we could clear it out and go forth! And it could well end up like the dig I did with Lionel many years ago; that rubble might well be the tail end of a sheer inexhaustible debris pile. But if you don't try you don't know!

We gathered at noon, and got kitted. There were five of us; more than enough for this cramped place! I got up to the ledge where we first wanted to fix a few more bolts. We had better be properly anchored on the wall when we would start shifting tonnes of rubble. The drill came up, and I did some bolting Welsh Style. And when that was done, David came up, and we could start. Which we did! We sometimes paused to give the people below the chance to clear the way; we didn't want to be blocking our way out. And as with the Lionel dig; everything we dug out was replenished from above. But we sometimes caught a glimpse of what was beyond; it clearly went up! 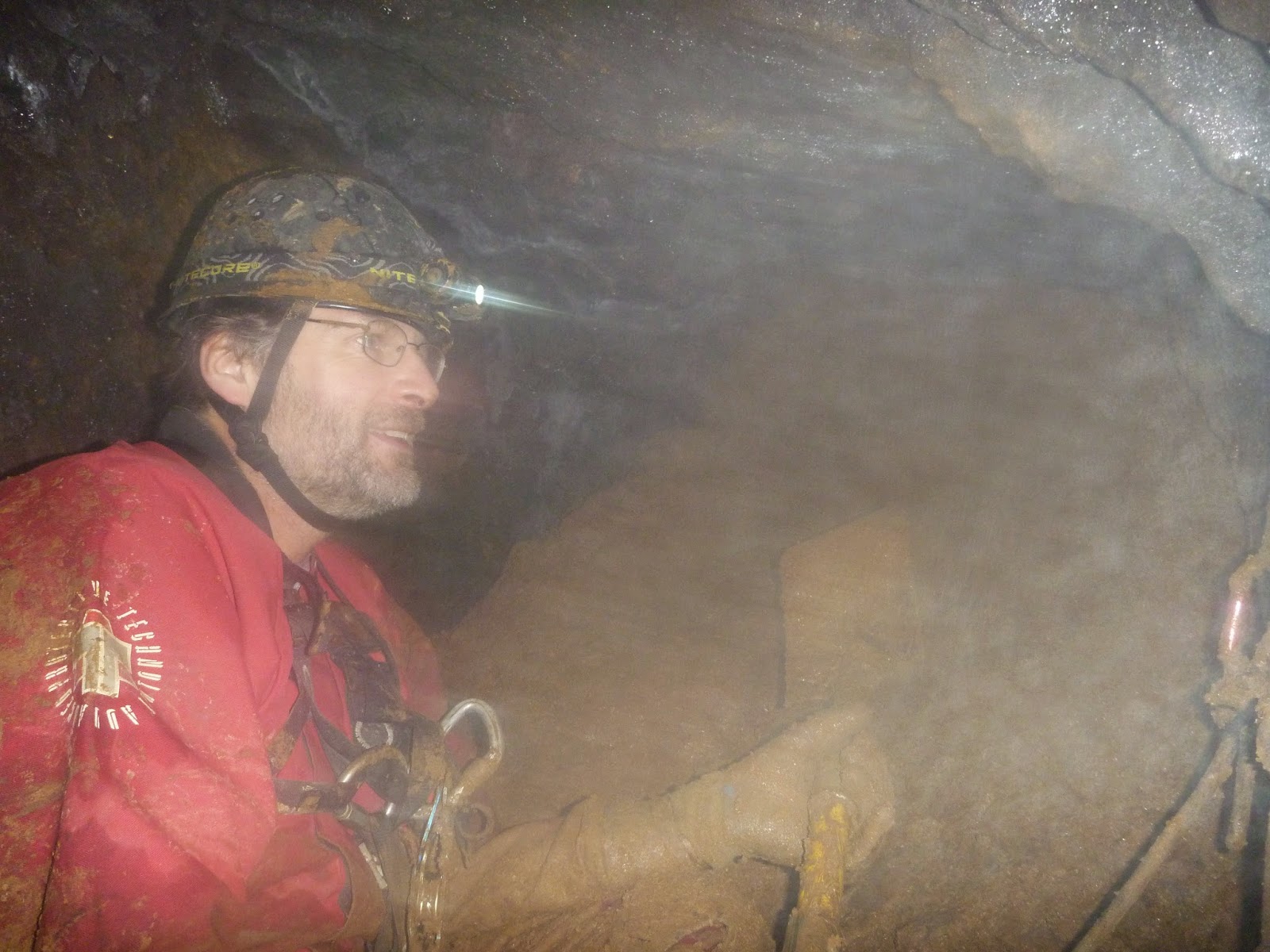 A foggy Dave (there was no air circulation, so our breath made photography hard) at the pile of rubble coming out of the passage

At some point we had created such a large cavity we could stick our heads in. And it looked decidedly iffy! A lot of precariously balanced rubble ready to come down. We should not try to go through there! We decided to call it a day. I went down, and started to clean the sides of the shaft; there was a lot of rubble perching there and you don't want to come down on your head while you descend. But while I was tidying up, the rubble in our cavity started to come down and David was VERY keen to get out of there, so he shouted me down. Out we went!

When I found the men waiting below, and one of them commenting on my appearance, I suddenly noticed that I was orange from head to toe. Oh dear! The men who had stayed below were looking impeccable. Fortunately, the way out is through an adit, partly flooded with clean water, so I'd get a chance to improve matters. 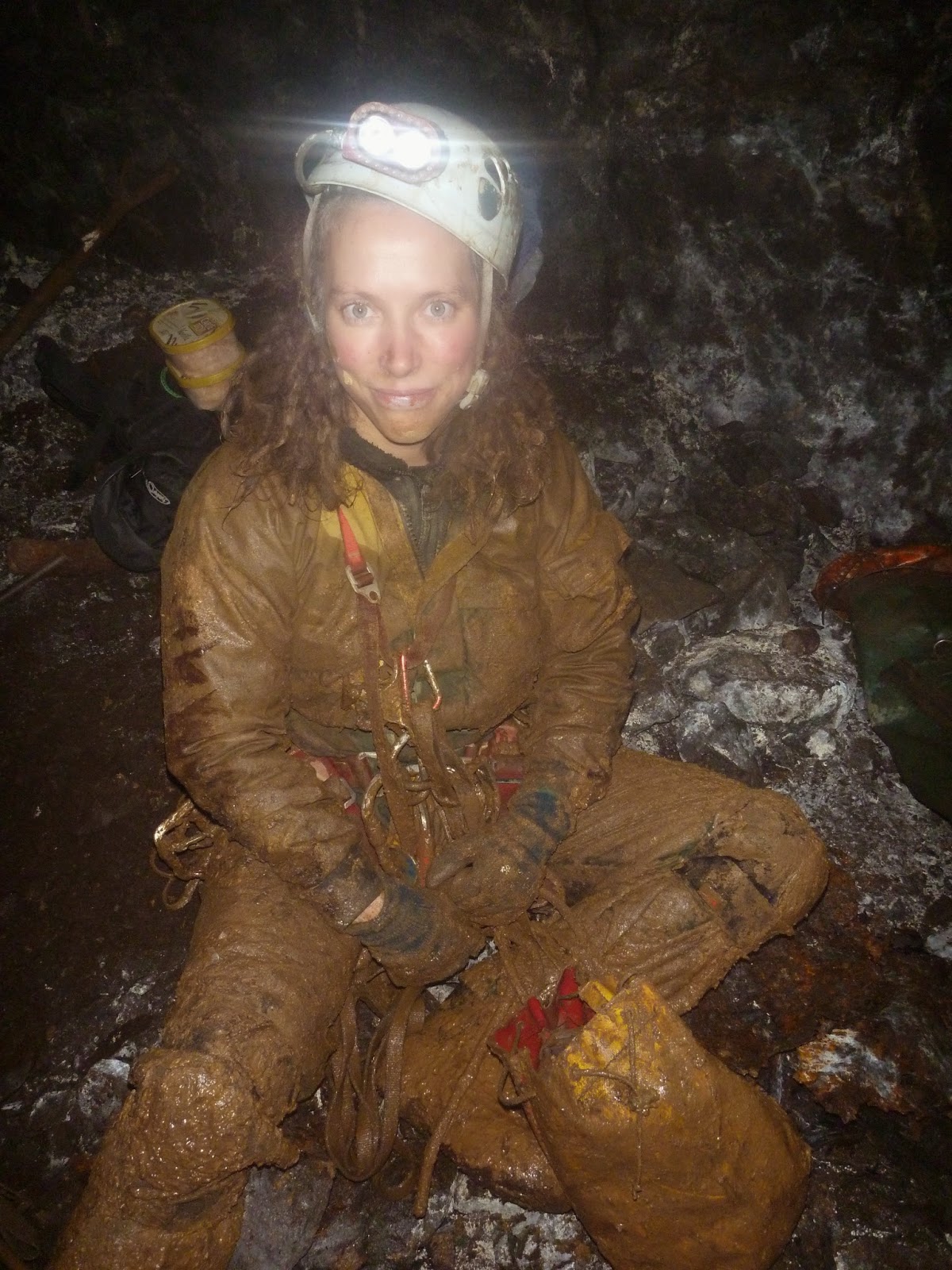 The state I was in after all the digging

Half of us went out through the mine; often we come out on the high level, but it actually is more fun to go down all the ropes, ladders and chains. It was good to see it all again! And at the entrance I washed all my kit.

Back at the cars Phil cut the cake. Pingu, who pretty much ALWAYS brings cake, had been a bit under the weather and had stayed at home, so mine was appreciated even more. It was good stuff! And I introduced it as "cacen arbennig iawn" (very special cake) as for some reason the cake tends to be festooned in Welsh terms, and that lead to Phil starting a monologue in Welsh about the situation. It was probably meant as a dialogue, but I couldn't keep up. But it's good to see there seems to be  a limit to how much longer I get away with English. In the new term I should have time to steepen my learning curve again! And then I'd happily try to forge a fitting response to such utterings.

After cake it was time to head for Blaenau Ffestiniog where Pingu lives; we would order takeaway from his place and eat it there, as a birthday meal. Of course Pingu had cake too. And tea! And a cat, which wanted to sit on Blober's lap. It was all quite nice. A birthday well spent! We didn't hang around too much; the next day would be a normal working day. And I know this was far from your standard Dutch birthday (for the non-Dutch: read about it here) but it was quite my cup of tea!
Posted by Margot at 09:58

Hoi Margot,
Your blog is the only blog I tend to follow. It gives me a nice opportunity to continue to follow your adventures, which is what your intention of the blog was (is). And finally I decided to use the comment box to show you that I do follow your blog.
You continue to surprise me with the beautiful and/or interesting photo's that you manage to make and your style of writing, very professional, very readable.
Unfortunately I have lost your e-mail address.
Please continue this inspiring blog.
Have a good Christmas and a Happy and Healthy New Year. Dirk Nieuwland

Thanks Dick! I got you card after all! Have a lovely time!