Nietzsche and Kant read the newspaper

It rhymes, and therefore it is true! What rhymes? The book title above, if in Dutch. When my friend Henco had read it it he offered it to me, as he knows I like philosophical books. And perhaps because he is eternally in peril of not being able to enter his own house because piles and piles of books are in the way. I had heard of the writer, as he is (or until recently was) a columnist in the newspaper. But I didn’t know much about him.

Then I started reading. The book turned out to be a collection of columns in which Wijnberg tackles current societal and political issues using philosophy. And I thought he did a spiffing job! And I thought I’d illustrate that with a few examples. I have retold them in my own words and often added my own examples. And I know there are readers of this blog who don’t read Dutch, so who won’t be able to read this book, but maybe the examples are in themselves worth reading too. 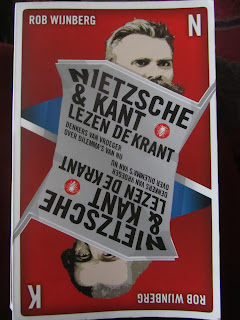 Wijnberg starts off with the curse of choice. There is, in many ways, more choice now than ever. That should be a feast! But it is not rarely described as a curse. And I suppose we've all sometimes perceived it as such. You want a new pair of shoes, but where to start? Too many shops, too many shoes within a shop. And for bigger choices it holds too: what topic to study at what university? What person to date? It’s not one of the bigger problems of society, but it’s a small one we all know. Wijnberg explains, referring to Isaiah Berlin, who wrote "Two concepts of liberty", that if there is more to choose from, the difference between the various options becomes smaller, and there is less reason to choose one over the other. In that sense, too much choice is indeed a hindrance. Berlin also pointed out that choices are easier to make when you have a stronger identity and personality. And only one or two generations back, you were born into an identity; you were born in a social class, in a religious community, in a village or town, and you were not at all likely to leave any of these. That made the choice of where to live (where you were born), what profession to pursue (the one your parent had) and what to believe (what your parents believed) very easy. Nowadays many people grow up in a family where no specific religion is adhered to, where you don't do what your parents tell you (if they tell you at all), and it’s normal to choose your own path, and end up somewhere random. So for many of us, it holds that you will have had to make many choices before you had even figured out who and what you were... not easy!

In the Netherlands, there is almost continuous discussion on whether one should be allowed to wear religious symbols in public. Those against often rail against head scarves; they are seen as suppression of women, and as a rejection of western morals. So they should be banned. But in order to stay consistent, then also crucifixes and skullcaps and the lot should be banned. Should they? Wijnberg rightly argues that religions are artificial constructions based on tradition. Can anyone define what a religion is? Should we ban strainers, as pastafari wear them as religious headgear? You may say that pastafari take the piss, but how can you be sure? If I start a religion that reveres denim, would jeans then become religious symbols, and be banned? In other words; religions are arbitrary constructs, as Dutch philosopher Paul de Beer already argued in 2007, and you should not base laws on them. Decide as a country whether you have civilian reason to object to clothing and accessories. If you decide it’s unsafe to have your citizens walk around unrecognisable, then ban the burqa and the full face helmet with tinted glass. But leave your citizens to wear what they want otherwise. 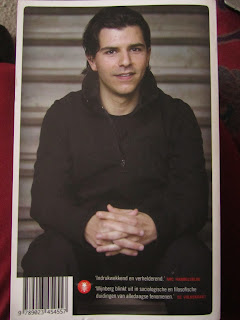 Even though Wijnberg’s texts are all of roughly the same size, my rewordings arent’t. That care for the environment is a prisoner’s dilemma (thought up by Merril Flood and Melvin Dresher, and completed by Albert W. Tucker) is fairly evident, but it’s well-explained in this book. And this observation does not inspire much hope for effective tackling of this issue. Maybe one day environmental destruction will become the common enemy that unites us all; Douglas Hofstadter already seemed to have pointed out in 1945, but it will have to come barging into our very doors (of all of us!) before I can see that happen...

The last example I’ll give is one of which I had no idea. And you can’t come to Wijnberg’s conclusions on reasoning alone. I’ll take his word for it! It deals with democracy (or whatever passes for it) in the USA. That the power is mainly in the hands of a few very rich people (which are not rarely male, white and Christian) is blatantly obvious. Wijnberg claims that is on purpose, and anchored in the constitution; that the task of the government is to protect the minority from the majority, as explained by one of the authors, James Madison. In other words: protect the few powerful rich against the plebs. And if you look at the discrepancies of what the people want (e.g. fewer wars, stricter gun laws) and what they get (none of that) it does make sense. And the low turnout at elections fits in well: many citizens have already noticed that the government will listen to corporal interests, not public interests. And elections are X Factor shows with little attention for the policy ideas of the candidates. And some important changes for the better have been made, such as the abolition and votes for women, but it’s a long struggle.

Beside these four examples Wijnberg discusses 47 more issues, including philosophically inconsistent politicians, the difference between lying and bullshitting, animals' rights, terrorism, abortion, the strange relationship between Christianity and sexual morality, women's emancipation, disproportional salaries, human rights, the nanny state, and drugs. It would be nice if (Dutch) politicians read it too! But it's also recommended for non-politicians. Even for the well-read who find the above examples quite evident I expect a few aha-Erlebnisse!

Nice to see that parts of a book you send oversea return to you (though a little rewritten) through the internet. And I appreciate this blogpost very much for the addition of references to other philosophers. Time to build a fresh pile.

Glad you like it! And the references are straight from the book! credit to Wijnberg.