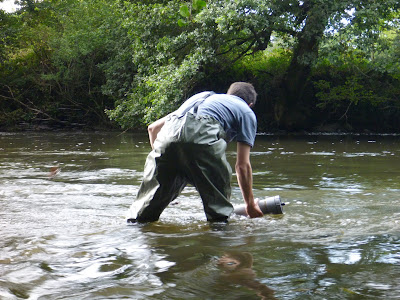 Hugh tending to a sampling tube
I figured that a bloke studying pollution due to mining activities should see a mine from the inside, and there was one very close by. So I informed Hugh of the expected water levels, and down we clambered, and into the dark we vanished! I hadn’t brought more than my helmet and my caving boots; it’s not a very wet mine and I had not bothered to load up my full kit into bicycle bags. What didn’t fit into my bag would have to stay at home. Hugh had waders with him, but was too tough to don them, and just sacrificed the wellbeing of his trousers and boots to science. 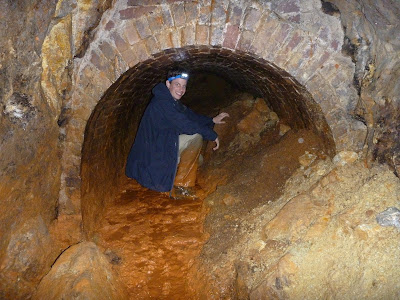 Hugh with clean jacket and filthy trousers in the furthest part of the mine
We travelled the width and breadth of this modest mine, and I pointed out the staining on the walls, which undoubtedly contained high levels of whatever he was interested in, and would probably leak quite some of that into the mine water, which drains straight into the Tamar. It was good to see this mine again, which I had only seen once, almost two years ago. And for Hugh it was an entirely new experience. 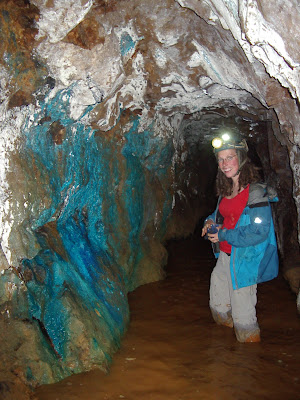 Doesn't my jacket look good with these stainings!
When we came out, all orange from the knee down, we washed the worst off in the Tamar (ha! more pollution!), and managed to get us back within the limits of social acceptability. We tested this by going to the pub, and being allowed in, and thus ended a day of splendid mine exploration mixed with science. Two birds with one stone! Or maybe even three, if you count the pub…

ps I hope I will one day figure out why this blog sometimes uses small font without my consent. Even specifying "12pt" in HTML doesn't help! Grmbl...
Posted by Margot at 13:45