I was confident about my second open day as organiser! After the first one went well I figured I knew now how it worked. I swanned in and expected no problems. But one should not be complacent either! The days before the open day there already was some confusion; people mentioning at the very last minute they needed a monitor, when so many were already in use, the lab technicians wanting to know further in advance what would happen and people doing a demonstration that needed technical back-up assuming the technicians knew exactly what was needed. Oh dear. But we sorted it.

This open day was going to be busier than the previous one. We had the numbers. At the last minute some more people registered but I figured I didn't need to reorganise things; the groups could get a bit bigger. The increase wasn't all that big. And then on the day the ship wasn't there. It was supposed to be there. Oh dear! That meant my schedule of what group would see what demonstration (the ship counts as one) had to be rejigged. Really rapidly. And there was no slack in the system anymore.

When the guests came I quickly checked who was here, adjusted the groups, and hoped for the best. And it went well! We had a good set of demonstrations. The day went alright. But from various staff members and peer guides I heard things that had not gone so well. Due to the ship being away non-biologists had been doing biological demonstrations (and probably vice versa) and weren't impressed. One parent was suspicious about us letting only the prospective students do the practicals; why did we separate them? Were they telling the prospective students different information from the parents (or other companions)?

I think for next time I need to have an extra demo lined up for in case the ship goes scampering again. And the Head of School will have to explain why we separate the visitors! I hope all will go well. It's only two weeks away! 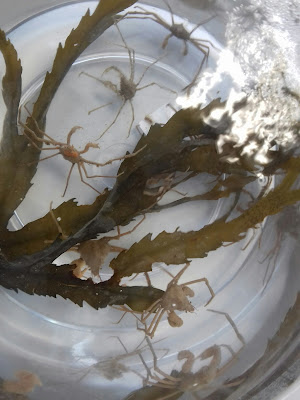 Some of the critters involved in the open day
Posted by Margot at 08:06